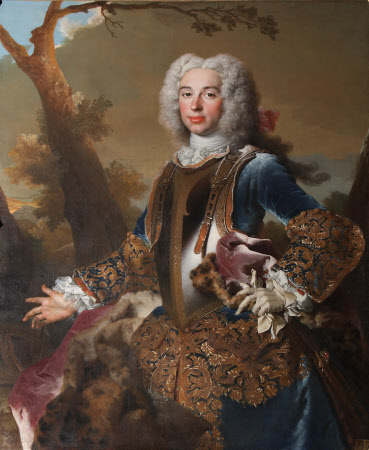 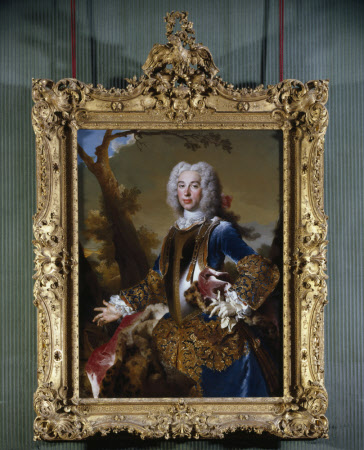 This is one of Nicolas de Largillière’s most striking portraits of a male subject. Sir Robert Throckmorton is portrayed wearing a blue coat with gold embroidery, a breast-plate lined with orange cloth and a purple fur-lined cloak held around his hips. It is one of four commissioned by the sitter from Largillière in Paris in 1729. The other three portraits are of Sir Robert’s female relatives who were nuns of the Dominican order.

Commissioned by the sitter in Paris in 1728 or the second half of 1729, and placed in the Parlour, Weston Underwood, Buckinghamshire; moved to Coughton Court by 1855 (ms. inv., p.10); thence by descent to Sir Robert Throckmorton, 11th Bt (1908–1989), until put up for auction by the Throckmorton Trustees at Christie’s, 26 June 1964, lot 70: bought in at £57,750; bought by the Ministry of Works and subsequently transferred to the National Trust.

Verso: (transcribed from the back of the original canvas; original spelling: Largillierre?) on lining canvas: Peint par N. de Largillière, 1729.