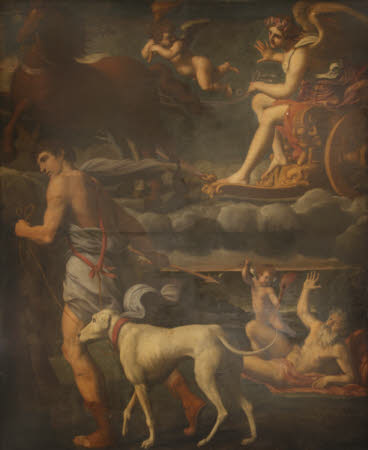 As related in Homer’s epic Greek poem, Iliad (XI) Aurora kidnapped four men, Cephalus, Clitus, Ganymede and Tithonus, to be her lovers. Ganymede was later stolen from her by Zeus, disguised as an eagle, to be his cup bearer and Cephalus longed to return to his mortal wife Procris, so Aurora finally released him. Tithonus, the prince of Troy, son of Laomedon and brother of Priam, was her favourite. She asked Zeus, if he would grant him immortality, which Zeus did, but, cruelly, not youth. So Tithonus continued to age and his body eventually became so old and decayed that Aurora laid him to rest in a room with shining doors where he remained until he shriveled up into a grasshopper. They did have two children together, Memnon and Emathion. Memnon was killed by the mighty Greek warrior, Achilles, in the Trojan war. To this day Aurora is so distraught over the death of her son that her tears cover the earth as dew, as she flies across the skies every morning.

Oil painting on canvas, Aurora, Tithonus and Cephalus, French School, circa 1600. The winged goddess of Dawn is in her horse-drawn chariot above on the right; Cephalus, with his javelin and leading his large white dog, Laelaps, walks to the left in the foreground and an elderly man, Tithonus, is reclining on the ground, bottom right. Winged cherubs are holding flaring torches, symbolising the dawn's light.