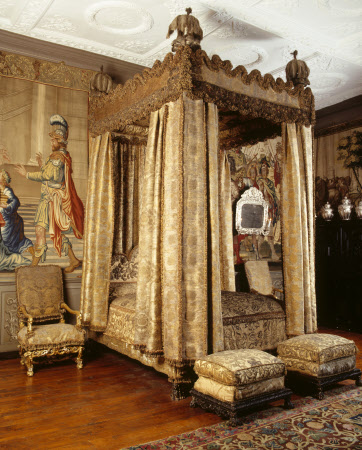 The so-called ‘King’s Bed’ is a state bed, Paris, 1672-3, hung with gold and silver brocade trimmed with heavy gold and silver metal fringe and lined with pink satin embroidered with silver. The upholstery consists of six curtains, two cantoons, three outer and four inner valances for the tester, three base valances, head cloths, bedhead embroidered with a royal duke's coronet in stump work and gold and silver thread. It also comprises cases for the posts, counterpane and four cups with plumes of feathers, which were originally red and white. The feet are carved in the form of couchant lions now painted black but with traces of gilding underneath. The bed came ensuite with two armchairs (129527.1-2), six stools (129528.1-6) and two squab frames (129529.1-2). Made in Paris, the set was either a gift from Louis XIV to James, Duke of York (later James II), and Mary of Modena for their wedding in 1673, or was ordered by the duke himself from Paris – the bed bears James’s coronet of a royal duke. One of the most remarkable French State beds to survive the reign of Louis XIV, its matching seat furniture bears the eagle of the Este family of Modena. The silk hangings and seat covers, woven with gold and silver bullion, constitute an immensely rich evocation of a Louis XIV state bedchamber translated to England. Geoffrey Beard originally attributed the bed to Jean Peyrard, Louis XIV’s upholsterer, who visited London twice between 1672 and 1673 to deliver six beds to Charles II. However, as Christopher Rowell recently argued, none of these described in the bills appear to match the bed at Knole (Rowell 2004, pp. 62-3). Charles Sackville, 6th Earl of Dorset, who was Lord Chamberlain to William III and Mary II, acquired the bed as a perquisite of office from the Wardrobe of Whitehall Palace in February 1694.

Presumably made in 1672/3 for James, Duke of York (later King James II) and his wife Mary of Modena. Recorded at Whitehall Palace in 1694, where used by William III’s cousin Prince Louis (Ludwig Wilhelm), Margrave of Baden-Baden during a state visit. Removed shortly afterwards from Whitehall Palace, either as a perquisite of office or as a gift from William III, by Charles Sackville, 6th Earl of Dorset in his capacity of Lord Chamberlain, and brought to Knole. Knole and the majority of its furniture were accepted by HM Treasury in part payment of death duties and transferred to the National Trust in 1946.