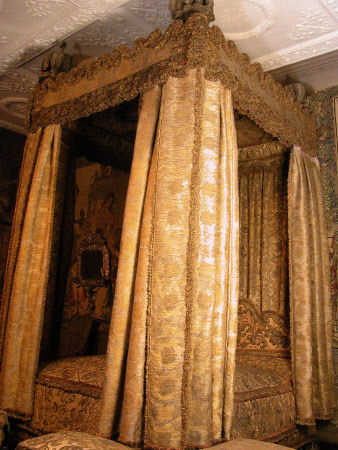 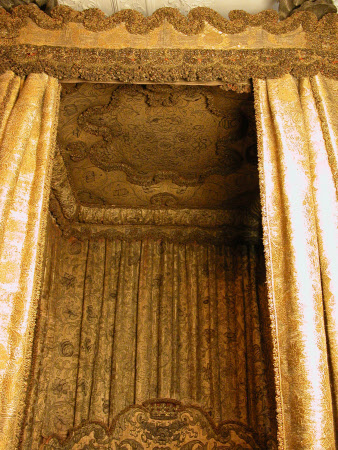 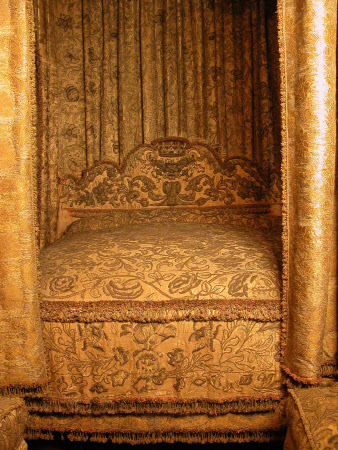 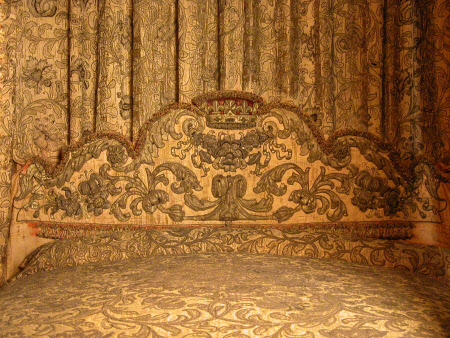 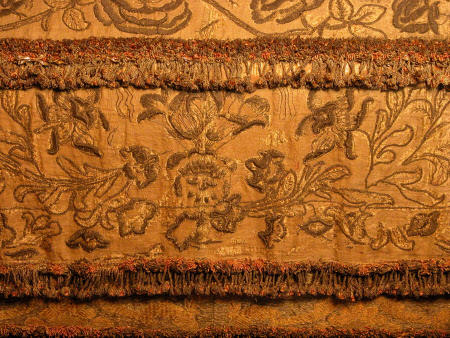 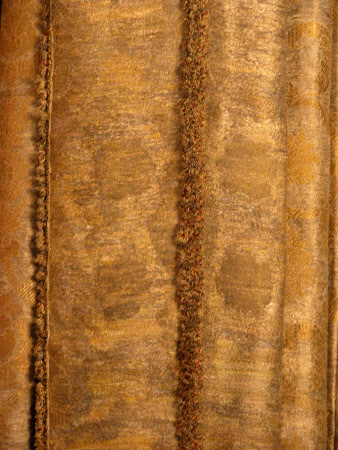 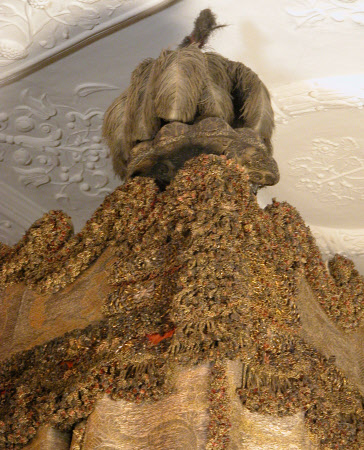 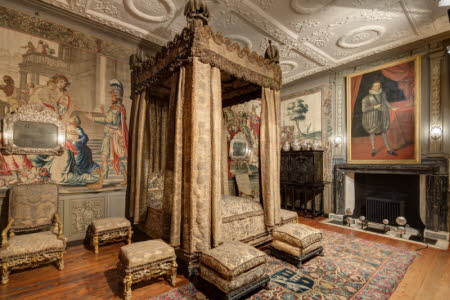 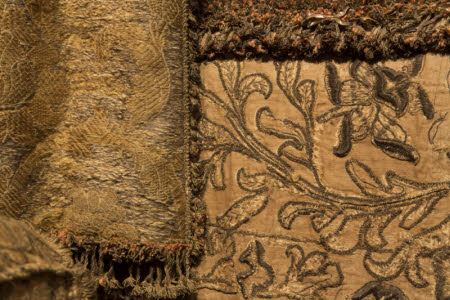 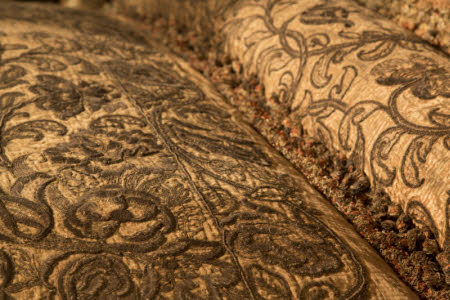 The King’s Room bed - the hangings woven with gold thread. The superb collection of 17th-century beds at Knole was collected by Lord Chamberlain, Charles Sackville, 6th Earl of Dorset, who inherited the estate in 1677. Charles had lived a colourful life; in 1662 he was one of three men found guilty of ‘exposing themselves to the populace in very indecent postures’ from the balcony of a brothel in Covent Garden. In 1667 he is said to have fallen in love with actress Nell Gwyn, with whom, according to Pepys, he ‘kept merry house at Epsom’ for a time. In Europe in the 17th and 18th centuries, beautiful fabrics were created for use in the homes of the wealthy. Louis XIV of France, known as the ‘sun king’, filled his Palace of Versailles in magnificent rich-coloured silks, brocades, taffetas and elaborate trimmings. The English copied the designs, festooning their beds with lavish curtains and canopies in rich fabrics, embroidery and colours. The bed in the King’s Bedroom is thought to be one of the most outstanding examples of a state bed of the Louis XIV period to have survived. The rare combination of gilding and silvering was found under a layer of black paint (that had probably been used during a period of mourning), and was subsequently restored. Beneath the paint, traces of the gilding can be seen on the finely carved lions’ feet. Although the crimson and white ostrich plumes have disappeared, it remains one of Knole’s great treasures. The king’s bed was made for James, Duke of York, the future King James II, for his marriage to Mary of Modena in 1673. When Mary was told she was to marry James she burst into tears as she had wanted to become a nun. The marriage went ahead however, and in 1688 Mary gave birth to a son, James III, later known as ‘the old pretender’. Parliament was not happy about a Catholic heir to the throne and although at least 12 people were present at the delivery, rumours were spread that the baby was a stillbirth, taken out of the birth chamber whilst no-one was watching, and replaced by an impostor who was smuggled into the room in a warming pan.

The so-called ‘King’s Bed’ is a state bed, Paris, 1672-3, hung with gold and silver brocade trimmed with heavy gold and silver metal fringe and lined with pink satin embroidered with silver. The upholstery consists of six curtains, two cantoons, three outer and four inner valances for the tester, three base valances, head cloths, bedhead embroidered with a royal duke's coronet in stump work and gold and silver thread. It also comprises cases for the posts, counterpane and four cups with plumes of feathers, which were originally red and white. The feet are carved in the form of couchant lions now painted black but with traces of gilding underneath. The bed came ensuite with two armchairs (129527.1-2), six stools (129528.1-6) and two squab frames (129529.1-2). Made in Paris, the set was either a gift from Louis XIV to James, Duke of York (later James II), and Mary of Modena for their wedding in 1673, or was ordered by the duke himself from Paris. One of the most remarkable French State beds to survive the reign of Louis XIV, its matching seat furniture bears the eagle of the Este family of Modena. The silk hangings and seat covers, woven with gold and silver bullion, constitute an immensely rich evocation of a Louis XIV state bedchamber translated to England. Charles Sackville, 6th Earl of Dorset, who was Lord Chamberlain to William III and Mary II, acquired the bed as a perquisite of office from the Wardrobe of Whitehall Palace in February 1694.

Presumably made in 1672/3 for James, Duke of York (later King James II) and his wife Mary of Modena. Recorded at Whitehall Palace in 1694, where used by William III’s cousin Prince Louis (Ludwig Wilhelm), Margrave of Baden-Baden during a state visit. Removed shortly afterwards from Whitehall Palace, either as a perquisite of office or as a gift from William III, by Charles Sackville, 6th Earl of Dorset in his capacity of Lord Chamberlain, and brought to Knole. Knole and the majority of its furniture were accepted by HM Treasury in part payment of death duties and transferred to the National Trust in 1946.