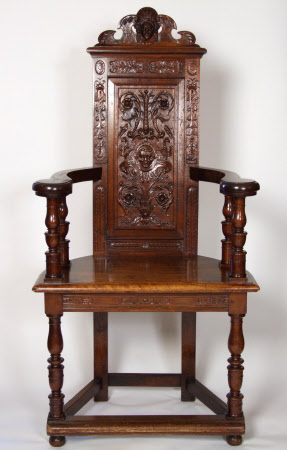 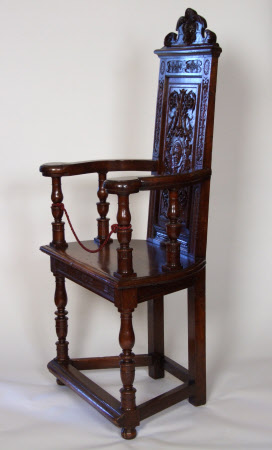 A caqueteuse, one of a group of four similar caqueteuses, French, last quarter of the 16th century. All with differences in carved designs and the manner of their turnings. This chair with a scroll-cut cresting centred by a mask, and above a fielded back panel centred by a mask within scrolling foliage and flowers, the rails carved with pendant foliage and ribands. Carved with a stiff-leaf pattern beneath the joint with the arms, which are outswept and end in circular terminals. Raised on two pairs of baluster-, cup- and reel-turned arm supports. The seat boarded around the arm supports and with moulded edge. The front seat rail carved. The front legs turned in the same manner as the arm supports, and each with a bun foot, are joined by a broad moulded front stretcher. The rear supports plain and rectangular-section, and with similar side and rear stretchers. Some parts restored and/or replaced.

The bequest of Margaret (Anderson) McEwan, The Hon. Mrs Ronald - later Dame Margaret - Henry Fulke Greville, DBE (1863-1942) from probate records linked with the donation of the property to the National Trust in 1943. This item found on the record for Polesden Lacey Entrance Hall, page 1.