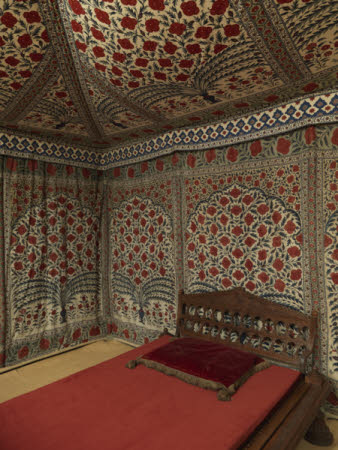 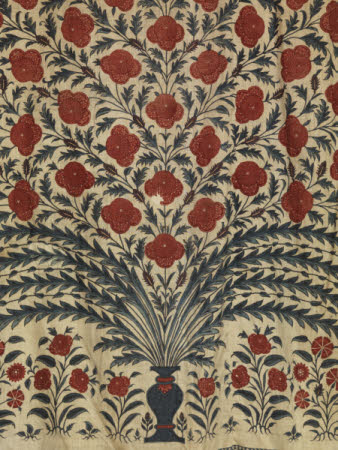 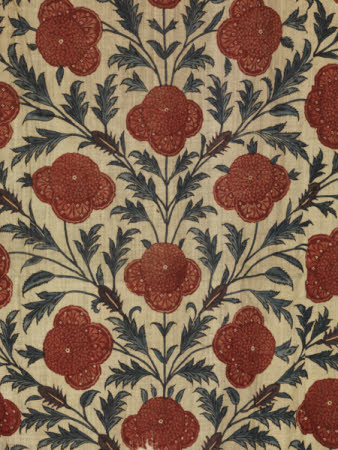 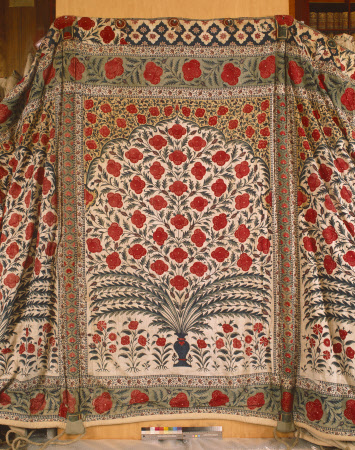 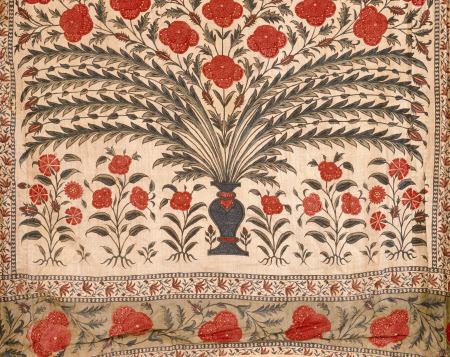 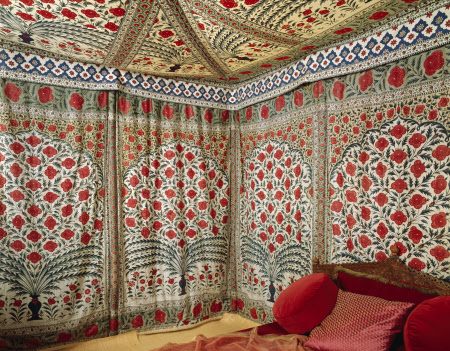 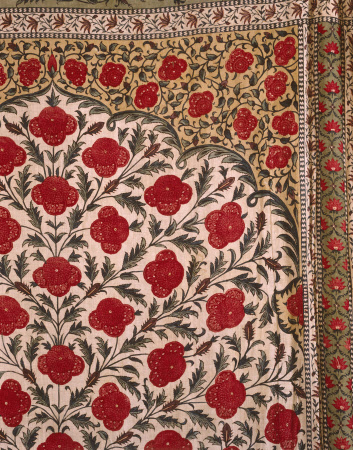 This magnificent campaign tent for Tīpū Sultān (1750–99), the ruler of Mysore in southern India, reused earlier tents from the late Mughal period, c.1725–50. The interior is lavishly decorated like a palace, using red, white, green and blue chintz-cotton fabric, which creates an illusion of panelled niches, each with a vase displaying red floral blooms. The design also includes a tiger motif, Tipū Sultān’s personal emblem. Although the tent still creates an enchanting space, some of the fabric dyes have faded, and the yellow decoration is no longer evident. Externally, the tent was plain white cotton with a red-and-white striped roof. The British regarded Tīpū as the last major impediment to taking control of India. His death during the siege of Seringapatam of 1799 was followed by the seizure of the spoils of war, particularly those associated with Tīpū. This tent and many other objects, including Tīpū’s travelling bed and parts of his throne, were obtained by Edward Clive, first earl of Powis (1754–1839), while he was governor of Madras (1798–1803) and subsequently became known as The Clive Collection.

A wall panel from Tīpū Sultān’s campaign tent, painted and dyed cotton chintz, marquee-like in form. The tent is made up of chintz-lined panels from separate tents (qanats), which can be dated to the later Mughal period, c.1725-50; Except for the South-Indian panels, which are probably from the time of Tīpū Sultān’s reign (1782-99). White background with patterned acanthus cusped niches, each enclosing a central vase with symmetrical flower arrangement, predominantly in reds and greens. An enlarged version of the flower-head motif appears in the main horizontal borders on a green background, with a scaled down version of the border dividing each floral filled arch. Triple vertical borders separate the panels, at each end of which is a metal eyelet that has been whipped with thick cotton thread. A black and white merlon and rosette band runs along the top of the qanats. The outside of the tent is a separate layer of coarse white cotton.

Campaign tents of the Mughal court were important symbols of a ruler’s power. The lavish interiors of these tents were enchanting spaces covered in flowered patterns that became popular from the seventeenth century onwards. These tents were the seat of royal power in the same way as a ruler’s palace complex conveyed one’s power (Crill 2015: 127). Tīpū Sultān (1750–99), also known as the Tiger of Mysore or Tīpū Sahib, was ruler of Mysore from 1782-99. Tigers were a feature of Tīpū Sultān’s personal effects as well as royal regalia. The interior panels of the tent include a tiger motif, which was Tipū Sultān’s personal emblem. Some of the fabric dyes have faded, and the yellow decoration is no longer evident. Externally, the tent was plain white cotton with a red-and-white striped roof. The South Asian collection at Powis is currently being researched and reinterpreted. Provenance Note: The tent has recently been identified as being made up of panels from separate tents. It is not always easy to pinpoint the origin of manufacture for Indian textiles nor the makers themselves. High quality painted and printed chintz fabrics were produced for the Mughal court in key centres such as Burhanpur and Machilipatnam, so it is likely that the tent originated from one of these sites (Stronge 2009: 24). The East India Company fought three wars against Mysore to control the land and its rich resources, and the British regarded Tīpū Sultān as the last major impediment to taking control of India. The British were able to definitively seize power at the Battle of Seringapatam in 1799, where Tīpū Sultān was killed. His death was followed by the seizure of the spoils of war, particularly those associated with Tīpū. This tent and many other objects, including Tīpū’s travelling bed and parts of his throne, were obtained by Edward Clive, First Earl of Powis (1754–1839), while he was governor of Madras from 1798–1803.

Acquired by Edward Clive 2nd Lord Clive (1752-1839), following the defeat of Tīpū Sultān of Mysore and the fall of Seringapatam in 1799. Brought to Powis Castle from Walcot Hall in 1930. Purchased by the National Trust from the Earl of Powis and the Powis Estate Trustees, with support from the National Heritage Memorial Fund and the Art Fund, August 1999. According to Accounts the 'Clive Tent' was repaired 31st October 1895 by Eldred Motham & Co at the cost of £1.18s.6d.