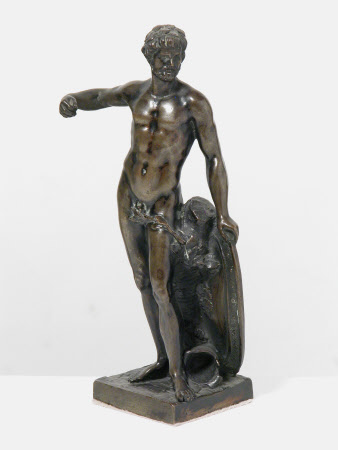 Bronze, Mars, attributed to Sébastien Slodtz (1655-1726), c.1701-99. A bronze figure of Mars, the Roman god of war. The figure is nude, covered by a branch of foliage, and leans against a tree trunk. The shield is held up with the left hand, the right hand once held a sword (now lost). Mars' helmet is at the proper left foot. The figure is mounted on an integrally cast bronze base.

Sébastien Slodtz appears to have drawn on studies for his sculpture of Hannibal to model Mars. The head and pose are close to his marble statue of Hannibal, which was commissioned for the Bâtiments du Roi in 1687 from a small model by François Girardon (1628–1715). The statue was completed in 1704 and installed in the Tuilleries; it is now in The Louvre, Paris, inv.no. M.R. 2093. The inventory for the sculptor's estate lists 'four figures in plaster about eighteen pouces high representing Mars, whose pieces are not put together, with the mold' and a clay model of Mars with a height of 50 centimeters (Souchal 1967, p.605). The height corresponds to a bronze Mars at Windsor Castle attributed to Slodtz, catalogued as the Emperor Hadrian in the guise of the god (RCIN 44195). In his 1967 catalogue Les Slodtz, Souchal suggests that Sébastien may have collaborated on the model for Mars with the sculptor Corneille Van Clève (1645-1732) who occupied a neighbouring studio in The Louvre and whose figure of Mars was cast by the foundry Le Pileur in 1697 (Souchal 1967, p.606). The figure was subsequently cast in a reduced form of 22 centimeters in a pairing with Venus and Cupid, as in this example at Erddig (paired with NT 1149422). Other known examples are at Woburn Abbey and in the Quentin Collection. Variations cast show Mars with a spear instead of a sword, and some are in gilt bronze. Alice Rylance-Watson January 2019