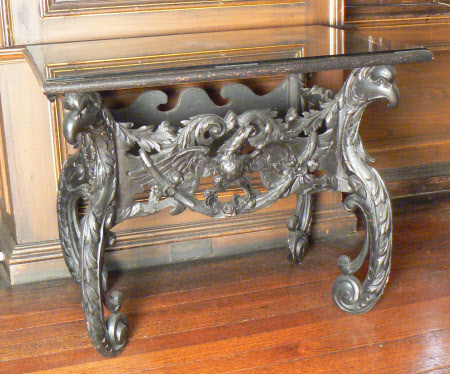 A side table, circa 1675, of carved and ebonised wood with a cane top set in a frame with a moulded edge. Each of the four legs has a double scroll turning inwards at the base and carved with an eagle's head at the top. The legs are joined by a large carved frieze partially in openwork to the front and sides, the back is left plain with a shaped edge at the top and bottom. This table “of black ebony cain’d”, en suite with a pair of candle-stands (NT 1139777.1 and NT 1139777.2.) and originally a “greate looking glasse with an ebony frame caned”, furnished The Duke’s Dressing Room as it appears in the 1679 Ham House’s inventory and the following. The 1677 inventory is less precise, mentioning a table and candle-stands of “ebony frame”; it is nevertheless one of the earliest "triad" recorded. The design of these three pieces is of French origin as the table's scrolled legs with eagles' heads and the tripod stands with their scrolled base appear in a drawing by Nicodemus Tessin. As can be seen on the watercolour by H.W Breuer (private collection), in 1886 the table and the pair of candle-stands were placed in the Long Gallery. Such sets formed a decorative ensemble and were very fashionable in England at this period. There were few other such sets in the house but the present "triad" is remarkable in being entirely black and with caned tops.