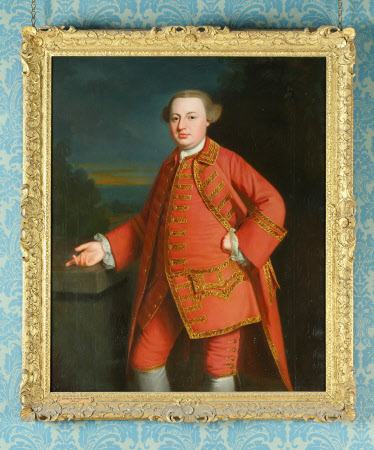 George Romney would eventually become one of society's most sought after portrait painters, but early support from the Strickland family was invaluable to his artistic development. The portrait shows Walter Strickland, who invited Romney to visit Sizergh and so provided the young painter with a rare opportunity to study and copy French paintings.

Oil painting on canvas, Walter Strickland (1729 - 1761) by George Romney (Dalton-in-Furness 1734 – Kendal 1802), 1760. A portrait, in red coat and cloak. Eldest son of Thomas Peter Strickland and Mary Scrope, the sitter inherited the Sizergh Estate on the death of his father in 1754 and married Margaret Messenger four years later. The couple commissioned Romney, then based in nearby Kendal, to paint their likenesses as a pair of pendant portraits in 1760 at a cost of £10 10s (see NT998427). The portrait was previously believed to be that of his younger brother, Charles. However, Romney’s portrait of Charles, showing him fishing by the cascade below Force Bridge on the River Kent, was sold in 1896 and is now in a private collection.