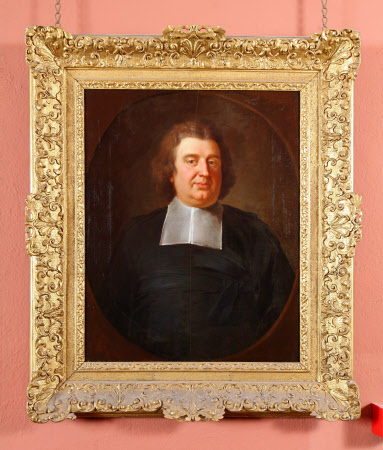 Oil painting on canvas, The Abbé François Gaultier (d. 1723), by Alexis-Simon Belle (Paris 1674 – Paris 1734), 1712-15. A half-length portrait in oil with trompe l'oeil oval frame, painted as an abbé commendataire, with clerical bands and in a soutane, but without a tonsure, facing, his head turned slightly to the viewer’s right. This is one of the remarkable group of French portraits at Sizergh that was given by James II’s widow, Mary of Modena, to the widowed Winifred, Lady Strickland. Gaultier first came to the notice of the Queen in exile at Saint-Germain as third vicar of the parish church, a post he lost by overstaying his leave in Normandy. He then became a secret, and ultimately an open, agent in London of Louis XIV, who in 1712 rewarded him with the two royal abbeys of Savigny and Olivet.

Presumably one of the pictures originally belonging to Mary of Modena that passed to Winifred Trentham, Lady Strickland, and thus back to the family at Sizergh; if not – especially given the old misidentification of the sitter as the Abbé Strickland, Bishop of Namur – might it have been acquired at the Earl of Oxford’s sale in 1741/2?; given by Henry Hornyold Strickland (1890 – 1975) with Sizergh Castle and its estates in 1950