workshop of Gillows of Lancaster 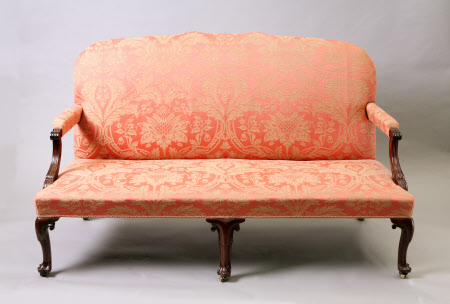 A mahogany and upholstered sofa, from a highly important set of eleven pieces of seat furniture, commissioned by Charles Strickland of Sizergh Castle in June 1761 from Gillows of Lancaster, and comprising two open armchairs [NT 998005.1 - 2] and eight standard side chairs [NT 998005.3 - 10]. The original commission included three 'armed' chairs. This sofa with a pair of small 'points' to its otherwise straight toprail, and with rounded corners. The stuff-over seat flanked by a pair of open arms, the upper part padded and with fluted and scroll terminal, the in-curved arm supports fluted and with panels created by an astragal to their sides. The seat raised on three cabriole front legs with ears carved with a small scroll, and ending in trefid pad feet. Fitted with brass castors; those to the sofa probably the original. Now upholstered in pink silk damask; once upholstered as, i.e. 998005.5.

This set of furniture is an early example of Gillows' output, and is well-documented. Thus, we know that the eight mahogany side chairs, described in the order as having 'neat legges' cost Charles Strickland 12s 6d a piece; the three armed chairs 'with fluted elbows' 18s 6d each, and this sofa with 'elbows & leggs [sic] suitable' £1 15s. These seats were supplied with stuffing to the backs and seats covered in fine canvas, for which Gillows charged a further £7 7s 8.5d, and eighteen brass castors (for the sofa and the armchairs) at a cost of 14s 6d. The Stricklands would have had the canvas supplied by Gillows covered with upholstery of their own choosing after they had taken delivery of the set. Susan Stuart has shown that some of their features derive from plates in Chippendale's Director and that this set of seat furniture is a good example of 'how Gillows combined features from design books and added other features of their own'. (Megan Wheeler, 2016 entry adapted from Susan Stuart, Gillows of Lancaster and London 1730 - 1840 (2008) 2 vols., pp.138 - 141.)

Ordered by Charles Strickland from Robert and Richard Gillow of Lancaster in June 1761, and presumably delivered to Sizergh in that year, or soon after. Thence by descent, and given by Henry Hornyold Strickland (1890 – 1975) with Sizergh Castle and its estates in 1950.