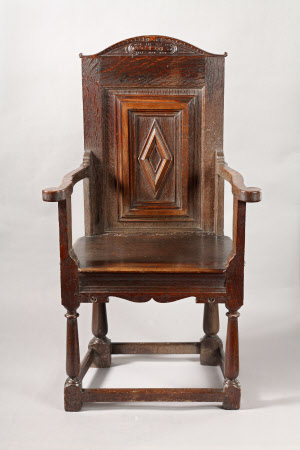 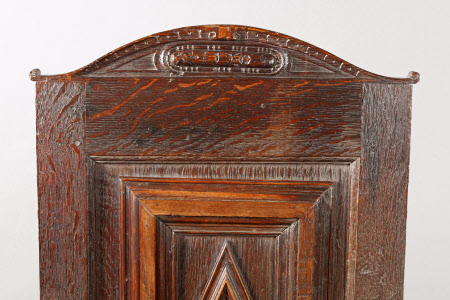 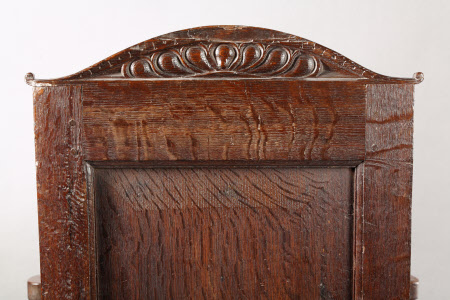 A panel-back open armchair, one of a rare very near pair of oak and inlaid panel-back open armchairs, English, probably Westmorland, dated 1570. Of joined and pegged construction. With an arched toprail which sits on top of the rear uprights, centred by an oval boss inscribed 'A 1570 S'. The toprail with scrolls at either end. This chair without the scroll to the centre of the toprail, and this cartouche in a border carved with alternating 'I' and 'O' motifs, whilst the other chairs cartouche surround is plain. The oval reserve flanked by sunken triangular spandrel-type reserves. Unusually carved to the rear of the toprail with a fan of six gadroons or petals (the other with five). The top edge also carved with alternating 'I' and 'O' motifs. The framed back inset with a panel - beveled to its rear edges - applied with mouldings forming a central lozenge, within an outer rectangle. The arms flat and outswept, and with flat circular terminals, and unusually joined to rear uprights which are wider at and beneath this joint, but are more slender above. The seat boarded and above a front seat rail with run moulding and with ogee-shaped bottom edge. The arms raised on stepped arm supports descending to simple baluster- and ring-turned front legs with block feet. The rear supports turned in the same way. All united by rectangular-section foot stretchers. --

Although this pair of chairs differ in certain elements, such as in the height and arc of the cresting, and the carving to the reverse of the toprail, parts of these chairs were clearly made by the same hand. The lettering of the inscription, and the treatment of the oval boss, is very similar to that to the three chests at Sizergh; it is possible that these elements were worked by the same craftsman. Related to NT 997985, a chair which is similarly constructed and decorated, but dated 1571, and with Walter's initials. These chairs are a remarkable survival, commissioned by the Stricklands as part of refurbishment works undertaken in phases at Sizergh in the late 1550s, 1560s and 1570s. Walter, Alice's husband, had died in 1569, and this pair bear only her initials. Exactly why this is the case is unclear: three chests dated a year after these chairs [NT 998159.1 - .3] bear the initials of both Alice and Walter, and so too does chair NT 997985. The lozenge-shaped mouldings to all three of these chairs match the paneling in what is now called the 'Old Dining Room' at Sizergh (probably denoted in the inventory of 1569 'thei chamber next Mr. Tempest chamber where thei dine'), a room which contains an overmantel dated 1563, and the paneling in the Boynton Room, which has an overmantel (the latest in the house) dated 1575. Also related to NT 997990 and NT 997991, two chairs which are undated (the former with later replacements) but which must have been made at the same period. They both have mouldings applied to their back panel to form a rectangle, and may thus have been made for a different room in the house. Stylistically, these chairs, like the Sizergh chests are Renaissance in character, if restrained. The other dated furniture and fixtures are believed to have been made by immigrant, probably Flemish, craftsmen who worked at Sizergh and other houses in the district over several decades. These chairs are unusually constructed in that the rear uprights change profile and are broader beneath the arm joint, and in that they are carved to the rear of the toprail. This latter feature, as well as the fine choice of timber and the complexity of the mouldings, testifies to their sophistication. Despite these features, however, they may well have been made by English craftsmen. The inventory of Sizergh taken on 27th April 1569 associated with Walter's will mentions various chairs; the one in the Lord's Chamber - the most expensive - was 3s 4d. A publication of 1908 by Daniel Scott transcribes another document, taken on 28th June 1569, which lists the contents of some rooms, but groups other pieces by category under titles such as 'Woddewarke'. 8 'newe chayres' were listed, as were one 'ney [new?] lytle chayres for a woman or chyld' and two 'old chayres off lynd' [lime?]. There are no chairs dated 1569 or earlier, and so although dated 1570, it is possible that these chairs were made prior to Walter's death, but carved and inlaid at a later date. (Megan Wheeler, 2016)