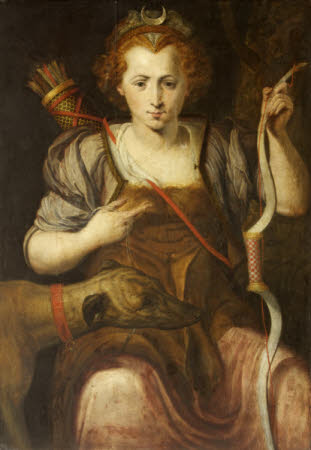 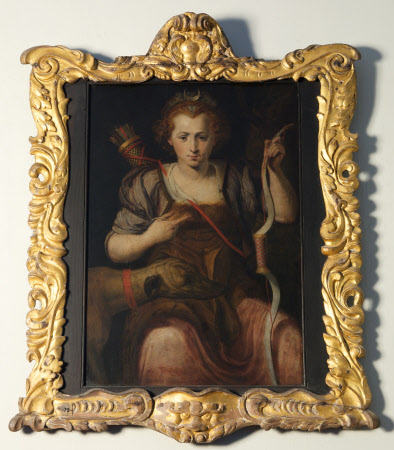 The goddess Diana is shown as the virgin huntress, carrying her bow and quiver, and accompanied by her dog. She is shown with a crescent moon over her head, which alludes to her identification with Selene, the moon goddess (who, conversely, was not renowned for her chastity). This picture is a copy after Frans Floris, a version of which is at Hatfield House. An inventory of 1868 lists the Hatfield picture as ‘Queen Elizabeth in the character of Diana’, but this would have been a traditional, but erroneous, identification. At Lacock there are a few copies after Flemish masters, such as Rubens and Cornelis van Haarlem, which were possibly collected by John Ivory Talbot (?1691 – 1772). Floris was a forerunner of Rubens, much influenced by the art of Rome, reflected, in particular, in his mastery of human anatomy.

Oil painting on panel, Diana the Huntress, after Frans Floris the Elder (Antwerp 1516 – Antwerp 1570), a copy of the painting attributed to Frans Floris the elder at Hatfield House. Seated, facing, with a quiver over her right shoulder and a bow held in her left hand. She gestures towards her right breast with her right hand, and a crescent moon adorns her headdress. A dog rests his head on her lap.

This appears to be a copy of the picture at Hatfield attributed to Floris (43 ½ x 34 ½ ; 110.5 x 87.6 cm.), cf. D. Zuntz, ‘A Painting by Floris’, Apollo, Nov. 1958, pp.154-5, repd., and E. Auerbach & C. Kingsley Adams, Paintings & Sculpture at Hatfield House, 1971, cat.91, p.92, pl.63). The 1868 Hatfield House inventory lists the picture as ‘Queen Elizabeth in the character of Diana’. The main differences between the two are: the jewels in the hair and the upper dress more ornamented in the Hatfield picture; 3 versus 2 fingers extended; different ornament on the bow in the central section; no billowing drapery behind her in the Lacock picture; and the height of the arrow behind her.