Portrait of a Lady of the Sharington Family, traditionally called Olive Sharington 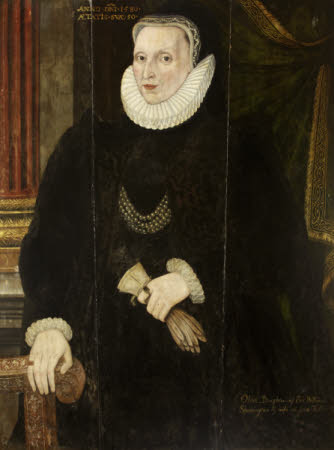 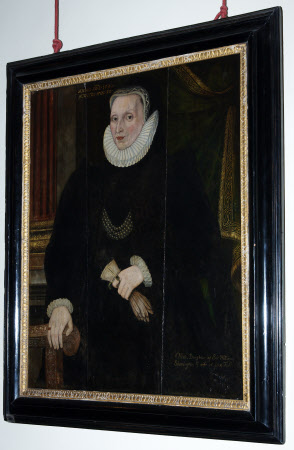 A later inscription on the painting states that the sitter is Olive Sharington, Grace’s granddaughter, but the style of painting seems too early for the sitter to be her. Given the mixture of styles, it seems conceivable that an earlier portrait was worked up to change the identity of the sitter.

Oil painting on panel, Portrait of a Lady of the Sharington Family, inscribed as aged 50 in 1580, called Olive Sharington, Mrs John Talbot (d.1646), English School. Inscribed: with the name of the sitter and Ano Dni 1580 Aetatis suae 50. A three-quarter-length portrait, to left, wearing a black dress with goffered collar and cuffs; there are four ropes of pearls around the sitter’s neck, and she wears a decorated flat cap; she holds a glove in her left hand, whilst her right rests on the arm of a chair decorated with leafy marquetry; in the background, a column to the left and a curtain with a golden fringe and decorative edging to the right.

The traditional identification of the sitter cannot stand, for – if the inscription at the top is original, Olive Sharington could not have been 50 years old in 1580: had she been the sitter, when she died in 1646, she would have been an unfeasibly longevous 116 years old. However, ADL feels that the date written on the picture is impossible, and that the picture has a hybrid feel about it, perhaps worked up later to forge an identity, and perhaps in imitation of an earlier picture. He has noted that the balding head is Elizabethan in style, and indeed the costume is datable to the 1570s/80s. A possible candidate is Grace, as the widow of Robert Paget, the third wife of Sir William Sharington (c.1495-1553), who bought Lacock Abbey in 1540. Her daughter from her first marriage, Anne, married her mother’s brother-in-law, Henry Sharington. However, why would Grace commission a portrait after the death of her husband? The sitter is placed in a similar setting to the portrait of William Sharington and its probable pendant of his third wife, Grace Paget. This picture, however, is not by the same hand as the earlier portraits, and is by an English, rather than Anglo-Flemish hand. Whilst the integral elements of the earlier pictures have been retained, the proportions in P/50 differ slightly, with the column to the left falling lower in the composition. Disappointingly, the leafy marquetry on the chair differs from the geometric design on that in P/26.

given by Matilda Theresa Talbot (formerly Gilchrist-Clark) (1871 – 1958), who gave the Abbey, the village of Lacock and the rest of the estate to the National Trust in 1944, along with 96 of the family portraits and other pictures, in 1948