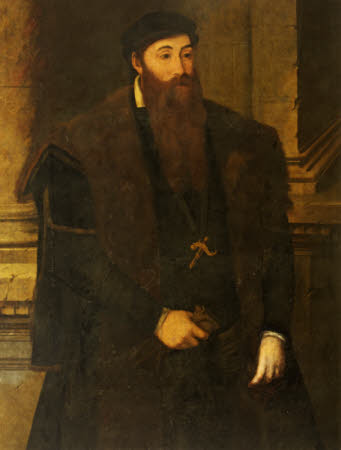 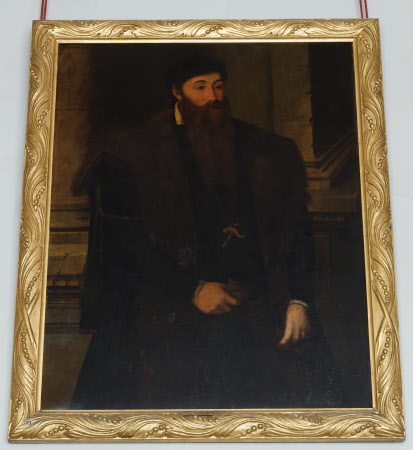 William Sharington bought Lacock Abbey in July 1540 for £783. He was later found guilty of embezzling money from the newly-established mint in Bristol. He narrowly avoided execution, and was pardoned. He later became an MP. He married three times, but had no children. He died before 22nd November 1553, and is remembered in an intricately carved tomb monument in Lacock church, testament to his sophisticated taste. He was succeeded by his brother, Sir Henry Sharington (d. 1581). The painting of the fur and the architecture is of high quality, but the face is almost wholly repainted, and the black costume badly damaged. The sitter does not look much older than in the drawing of him by Holbein, so it seems most likely that this was painted quite soon after his third marriage in 1542, and before his disgrace in 1549.

Oil painting on canvas (transferred from panel), Sir William Sharington (c. 1485 - 1553), British (English School), circa 1545/53. Sir William Sharington, the first secular owner of Lacock. A three-quarter-length portrait, in black, with fur collar, shoulders, facings, and trimmings to sleeves; sash around waist; frontal, turned and facing slightly right; long beard, of same reddish-brown colour as fur; small white collar; holding gloves in right hand, left hand against side [and too smudged to see if holding anything]; miniature dagger (?) in a scabbard with an elaborate S-shaped hilt, suspended from a black V-shaped ribbon round his neck; architectural setting with chipped bases of column and pilasters to left and right. Probably painted as the pendant to no. 26, probably of Grace Paget, Lady Sharington.

Probably at Lacock since the mid-sixteenth century, and thence by descent; given by Matilda Theresa Talbot (formerly Gilchrist-Clark) (1871 – 1958), who gave the Abbey, the village of Lacock and the rest of the estate to the National Trust in 1944, along with 96 of the family portraits and other pictures, in 1948