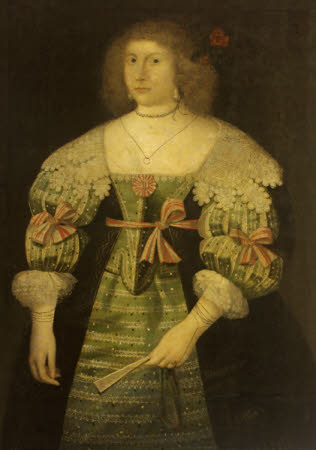 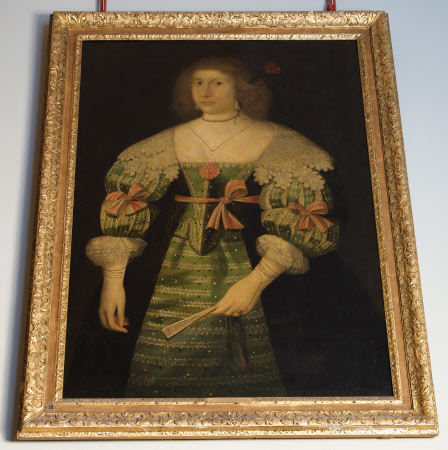 The idenity of the sitter has been the subject of debate, but she is most probably Jane Lyttleton, who married Sharington II Talbot of Salwarp and Lacock (d.1677). Their son and heir was Sir John Talbot (d.1714), who was instrumental in transforming the fabric of Lacock. The sitter had tradtionally been indentified as Elizabeth Leighton, the first wife of Sharington I Talbot, and the mother of Sharington II. Given that he was born in about 1605, she would clearly have been too old around 1630 to have been the sitter here.

Oil painting on canvas, Possibly Jane Lyttelton, Mrs Sharington II Talbot (possibly by the same hand as NT 996283). A three-quarter length portrait, turned slightly left, in corseted green striped and spotted dress, over which is tied a black coverlet, fastened with a red striped bow, which is mirrored in both sleeves; the dress is embellished with an elaborate lace collar and cuffs. She wears two necklaces, on one of which is strung a ring, and bracelets on both wrists (the chain of that on her left hand extends and attaches itself to her ring). She wears a rose in her hair, and holds a fan in her left hand. Like her husband (if it is he) she wears a braid extending from her left ear.

Jane Lyttelton was the daughter of John Lyttelton (c.1557 – 1601), of Frankley, Worcestershire, and MP for that county, and Meriel Bromley. On 20th February, John Lyttelton was convicted of high treason for participating in the Earl of Essex’s conspiracy. His daughter, Jane, was one of six, and married Sharington II Talbot of Salwarp and Lacock (d. 1677) on 13 October 1627 (see Burke’s Peerage, vol.I, p.838). In 1630 she bore him his son and heir, who was to become Sir John Talbot (d. 1714). She also bore him a daughter, Elizabeth, who married Henry Davenport (d.1698). Probably by the same hand as NT 996283, probably of Sharington II Talbot, although it is debatable as to whether it is its companion. Indeed it seems odd that the two sitters do not face each other, although stylistically, and size-wise, they are concordant with each other. The sitter whom this was traditionally identified as of, Elizabeth Leighton, was the first wife of Sharington I Talbot, and the mother of Sharington II. Given that he was born in about 1605, she would clearly have been too old around 1630 to have been the sitter here. Datable to c.1625-35, on the basis of her dress, or, more precisely, between c.1627, after her marriage, and c.1630, when their son and heir, John Talbot, was born.