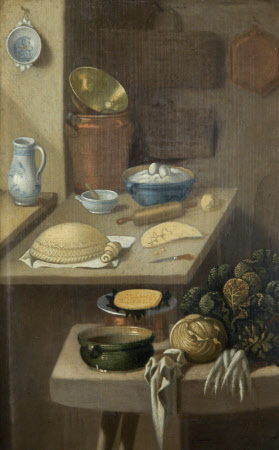 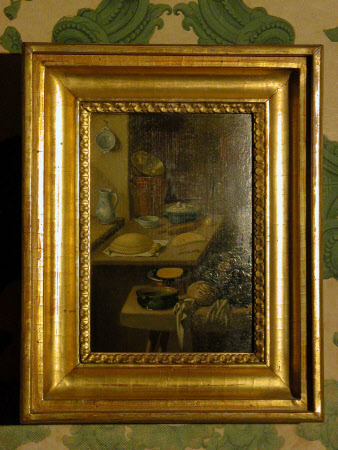 This vertical still life by a little-known Viennese artist of the 18th century has a more unusual arrangement than those typical of Holland in the 17th century. It is not a display of worldy goods or imbued with symbolic messages of time passing. It lies in the domestic simplicity of a kitchen scene. Instead utensils, a copper pot, bowl, jug, rolling pin, pastry, cabbages and radishes are laid out in preparation for the cooking to begin.

Oil painting on panel, Kitchen Still Life with Pastry and Vegetables by E. K. Lautter (Austrian, fl. 18th century), signed, below table top: ?E.K. Lautter / F. Some pots, a white cloth and cabbages and radishes are placed on a raised chopping block in the foreground. Beyond it, a sideboard is littered with kitchen utensils, including a large copper pot in the far left corner, and a rolling pin with some rolled-out pastry. A small blue and white dish hangs on the wall to the left and a matching blue and white jug stands on the surface below.

Verso: half-melted red wax seal on the back of the panel, with initials B and C, and chalk no.17