Worship of the Golden Calf 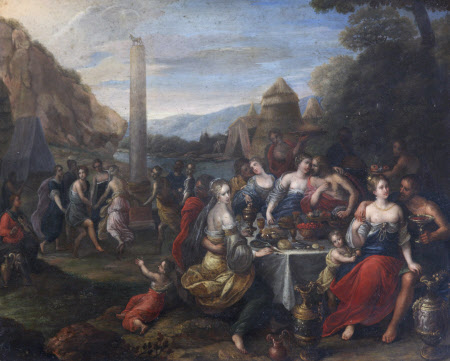 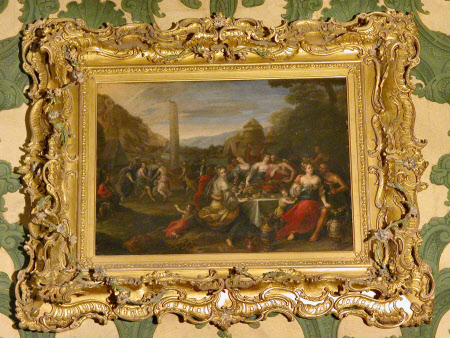 A group of men, women and children have set up camp and are feasting and making merry at a table, adorned with luxurious golden vessels and utensils, whilst others dance around a column with a cast golden calf set on top, to the music of an instrument called a lira da braccio, similar to a violin, popular during the artist’s lifetime. In the biblical story the Israelites ask Aaron, Moses’s brother, to give them idols to worship in his absence. The mountain in the background alludes to Mount Sinai that Moses climbed to receive the tablet of the Ten Commandments from God.

Oil painting on copper, Worship of the Golden Calf by Frans Francken II (Antwerp 1581 - Antwerp 1642) and Studio. The biblical story of the Israelite's worship of the golden calf is taken from the Old Testament Book of Exodus 19; 20; 32:1-24; 37. Whilst Moses climbed Mount Sinai to receive the commandments from God, the Israelites asked Aaron, Moses's brother, to give them idols to worship, so Aaron used their ornaments to make a golden calf. On his return, Moses was furious at the Israelite's idolatry and he destroyed the calf. In this depiction of the story, a group of men and women are feasting and making merry at a table in the right foreground underneath a large tree. A musician playing a lira da braccio sits at the far left and a group of dancers holding hands are seen to the right of him. They dance around the golden calf which is set on the top of a tall column in the left middleground on the banks of a stream. There is a tented encampment beyond the stream and more tents at the foot of the rocky hillside on the far left of the scene. A mountain range rises up in the distance, referencing Moses's ascent of Mount Sinai. Francken’s richest composition of this particular subject is the panel of around 1630, in the Fitzwilliam Museum, Cambridge.