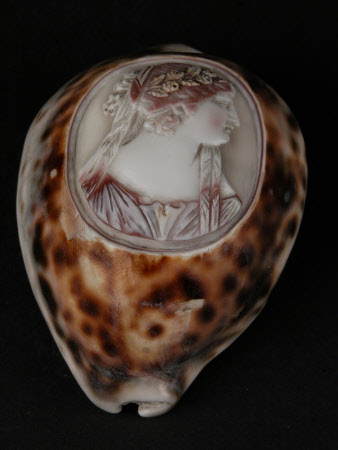 A tiger-cowrie shell with carved cameo depicting a girl's head.

The girl's head is cut in low relief. The layers of natural colour in the shell have been skilfully used to depict the brown of the girl's hair and the rose of her cheek. Cameo-portraiture was contemporary with the cutting of silhouettes, but more inclined to represent sitters not as they were but as the idealising classic mode would like them to be. A clue to the place and date of origin is perhaps given by G. Bernard Hughes in an article 'English Shell Cameos' published in Country Life (22 July 1949), He writes 'Itinerant cutters, working from life, were travelling the country during the 1850's. This was a period when shell cameo work was viewed with an indulgent eye: it was advertised as "in the most exquisite style of finish and perfect in contour and taste". Prices for such perfection were reasonable, good shell cameos cost £1 to £5 for heads, £3 and more for the finest large examples'. The interior has been packed with plaster-of-Paris, either by the cameo-cutter for working purposes, or by some purchaser for protection of the work.