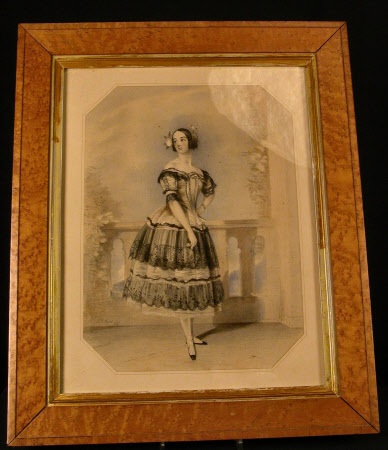 Hand-coloured lithograph, Pauline Duvernay (1812-1894) as Florinda in Jean Coralli's Le Diable Boiteux (1836) by John Frederick Lewis, RA (London 1805 – Walton-on-Thames 1876), after his own watercolour, 1837. The dancer is shown in the Spanish dance La Cachucha in Coralli/Gide's ballet, translated as The Devil on Two Sticks or The Lame Devil, performed at the Paris Opera in 1836. The dance was immortalised by Fanny Elssler (1810 - 1884) (whose name is insrcibed in pencil) for which the poet Théophile Gautier called her the 'pagan' dancer, implying sexy. There is another state in the V&A.

Verso: Inscibed in pencil: Fanny Elssler in the costume of a Florine in the Ballet 'Le Diable Boiteux' dancing the Cachucha. At the Paris Opera 1836.