Thetis Dipping Achilles into the Styx 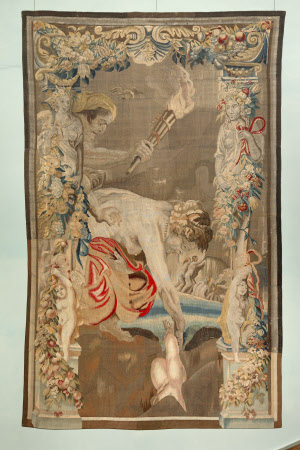 Tapestry, wool and silk, Thetis Dipping Achilles into the Styx from a set of three of the Life of Achilles, Flemish, c. 1650-1670. Thetis, wearing a red robe, leans over from the bank of the river Styx to lower the infant Achilles head first into the water, holding him by his heel. To her left an old woman holds a torch and in the distance below Thetis’s heads a group of naked figures can be seen entering the underworld. The upper part of the tapestry is largely brown. There are borders at each side with putti among garlands and herms, and at the top a shell between swags of fruit. There is no lower border. The lower parts of the side borders, and some other small areas in the borders, have been rewoven.

‘Thetis Dipping Achilles into the Styx’ is the first scene in the ‘Life of Achilles’ series. When Achilles was born his mother Thetis received a prophecy that her son would die young, so she tried to make him immortal by dipping him in the waters of the river Styx, which marked the boundary to the underworld. However the heel she held him by remained vulnerable and Achilles would eventually be killed by an arrow to his heel – hence the proverbial ‘Achilles heel’. The tapestry shows Thetis lowering her son into the water, with one of the three Fates holding a torch. The crude translation of Rubens’s original design, including the reduction of the landscape on the right, has made the background confused and difficult to read. What now looks like an isolated group of tiny figures in a brown expanse was originally a representation of the shadowy waters of the Styx with Charon in the background ferrying souls across to the underworld. The three ‘Achilles’ tapestries at Nunnington Hall come from a series telling the story of the ancient Greek hero Achilles, son of the sea nymph Thetis and Peleus, king of the Myrmidons, and hero of the Trojan War. There were eight scenes in the original series: ‘Thetis Dipping Achilles in the Styx’, ‘The Education of Achilles’, ‘Achilles among the Daughters of Lycomedes’, ‘The Wrath of Achilles’, ‘The Return of Briseis’, ‘Thetis Receiving Arms for Achilles’, ‘Achilles Slaying Hector’ and ‘The Death of Achilles’. The ‘Life of Achilles’ was the fourth and last tapestry series to be designed by Peter Paul Rubens Rubens (1577-1640). The designs are simpler and smaller than his earlier series, and were thus well suited for commercial production. The original oil sketches or ‘modelli’ have traditionally been dated to c. 1630-35, although recently Koenraad Brosens has argued for a date of c. 1638-9 (Brosens 2010). Seven of the modelli, painted in oil on small wooden panels, are today in the Museum Boijmans van Beunigen, Rotterdam. After Rubens’s death at least three further scenes were added to the series, and their designs are usually attributed to Jacob Jordaens (see Nelson 1998, pp. 49-51). Rubens’s sketches were the basis for full-sized cartoons used for weaving the tapestries, which are all reversed in relation to both sketches and cartoons. The cartoons were commissioned and owned by the Antwerp merchants Peter Fourment and Peter van Hecke who loaned them out, so that editions of the tapestries were produced by different Brussels workshops. The earliest producers of ‘Achilles’ tapestries were Jan Raes and Daniel I Eggermans, who took over Raes’s workshop after his death in 1639. A complete set of eight tapestries signed by Eggermans in the Villa Viçosa, Portugal, and datable to c. 1539-40, may be the first edition woven. In 1653 the cartoons were bought jointly by the Antwerp merchant Hendrik Lenearts and the Brussels tapissiers Jan van Leefdael and Gerard van der Strecken, and a large number of weavings signed by or attributable to them survive. Individual pieces or sets appear signed by other Brussels weavers including François van den Hecke and Jan Raet and also the Antwerp entrepreneur Michiel Wauters. The last record of the cartoons is in 1685, when Jan van Leefdael’s son Willem sold part of his share in the cartoons to his sister and her husband (Brosens 2010; Delmarcel in Lammertse and Vergare 2003, pp. 33-4). Rubens composed his original modelli complete with architectural borders, with a stone ledge at the bottom, a pediment with a central cartouche at the top, and herms at the sides. Each border is adorned with different allegorical devices that relate to the central scene. These borders were abandoned in most of the weavings of the series and the result is that a number of different border designs survive, most of them taking the form of a separate band of decoration, or of columns. As Haverkamp-Bergmann points out, the borders on the tapestries at Nunnington are unique in that they retain Rubens’s architectural format – the herms are clearly visible at each side - but modify it with flowers and putti (Haverkamp Bergmann 1975, p. 73). The putti and swags are similar to those seen in borders on Achilles tapestries woven by Gerard van der Strecken, but less elaborate. Without a signature it is impossible to attribute the tapestries at Nunnington to a particular workshop. The depiction of faces and figures is less refined than on many surviving examples, and the designs have also been reduced in size, with areas above and below the figures omitted. Together this suggests a set woven later in the seventeenth century and by a less prestigious workshop than those named above. It is possible that the tapestries were woven in Antwerp rather than Brussels – we know that at least one Antwerp weaver, Michiel Wauters, wove Achilles tapestries. (Helen Wyld, 2013)