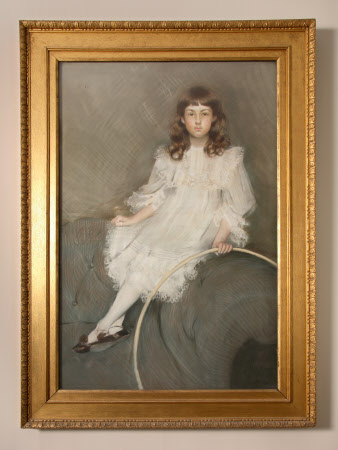 Pastel on paper laid down on canvas

Pastel on paper laid down on canvas, Margaret Rutson, Mrs Ronald D’Arcy Fife (1890-1952) as a Young Girl by Paul César Helleu (Vannes 1859 – Paris 1927), signed Helleu, circa 1900. A full-length portrait wearing a white lace dress and holding a hoop. Helleu's celebrity - even as a portraitist - is as a maker of dry-point etchings: it was indeed, through the extraordinary prices that he was able to charge for these that he was able to maintain a yacht with a permanent crew of twelve! But he was also well known for his pastels, of both flowers and people, though many fewer of these seem to be known. He was a great anglophile - not least, because of his love of yachting at Cowes - and an important exhibition of his works (59 drypoints, but only 5 pastels) was held at Robert Dunthorne's gallery in 1896; Edmond de Goncourt wrote the introduction to the catalogue, and Alexandra, Princess of Wales visited the exhibition and commissioned a portrait. In 1900 he met and painted two pastels of his most celebrated English (-American) sitter, Consuelo (Vanderbilt), Duchess of Marlborough, whose image has been immortalised by his dry-points. How and when (but, from the sitter's age, it must have been soon after 1900) the Rutsons met Helleu and got him to paint their daughter is not known. Most of his etchings and pastels of children were of his own, so this commissioned portrait of a young girl with a hoop, executed primarily in black, greys, and white (it was Helleu whose innovation of painting the walls of his Paris apartment white was admired and imitated by Whistler and Oscar Wilde), is something of a rarity, particularly in an English house. It is a striking thing, with both timeless appeal and a strong period feel (as with the best of Helleu's drypoints), and has a considerable presence at Nunnington.

Bought by National Trust in 1998 from Mrs Peter Clive, daughter of the sitter, Mrs Fife, who gave Nunnington to the Trust