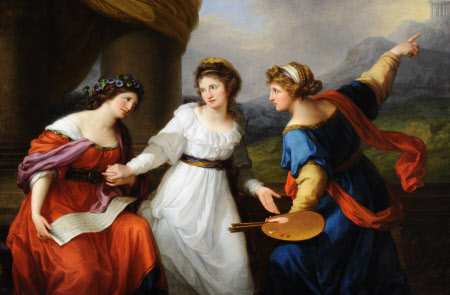 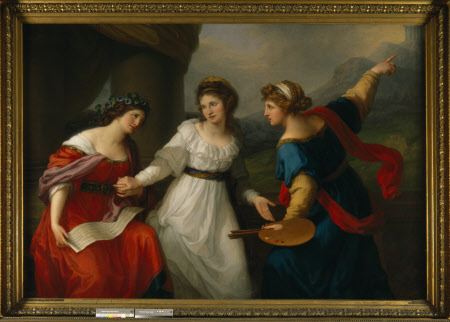 A young woman dressed in an immaculate white dress stands between two figures who can be identified as the personifications of music and painting. The scene depicts the youthful dilemma of the Austro-Swiss artist Angelica Kauffman (1741–1807), undecided about which of her two talents she should pursue. Most unusually for a woman at this period, Kauffman chose to become a painter and went on to establish a successful career in Britain. She was one of the founders of the Royal Academy of Arts and, aware of her own remarkable status as a successful female painter, she made numerous self-portraits to publicise her work. She was in her fifties when she produced the painting shown here and perhaps enjoyed looking back at her youthful self-determination.

Oil painting on canvas, Self-portrait of the Artist hesitating between the Arts of Music and Painting by Angelica Kauffman RA (Chur 1741 – Rome 1807), signed on the artist's sash: Angelica Kauffn Sc. & P. Pinxit, Rome 1794.

The Austro-Swiss artist Angelica Kauffman spent formative years in Italy before settling in London in 1766. She was one of the most prominent artists in England, one of only two founding female members of the Royal Academy and the last woman to be admitted until 1922. This painting, which is a very fine example of her work, was executed in Rome, where she returned to live with her husband, Antonio Zucchi (1728-95), from 1781 until her death in 1807. Painted when Kauffman was in her fifties, it dramatizes the quandary faced by the artist at the very beginning of her career: whether to pursue a profession in the traditionally male-dominated field of painting, or to practice music, for which she had equal aptitude. Music is personified at left and looks persuasively at Kauffman, holding her hand to gently pull her closer. Dressed in a pure white gown, the artist leans away from Music and gestures towards Painting, who fervently points towards a classical temple high on a hill in the distance: a symbol of the difficult journey ahead and of the intellectual reward of a career in the visual arts. Kauffman gazes at Music with both regret and resolve, having made her choice to follow Painting. The painting was acquired by the 2nd Baron St Oswald in 1908, from the collection of Mrs Strickland at Cokethorpe, to serve as a pendant to the More family group portrait (NT 960059) at the opposite end of the Top Hall of Nostell Priory (once the organ, installed in the 1820s, had been removed to Wragby Church). The 2nd Baron may have been attracted to the painting because it was thought at the time that Kauffman, rather than Zucchi, had worked with Robert Adam on the decoration at Nostell. It remained in the Top Hall until 1939. Though it came relatively late to the collection, it is now a well-known picture at Nostell. Another version, dated 1792, is in the Pushkin Museum, Moscow.

Given by the artist to James Forbes of Stanmore Hill, Middlesex in Rome 1796; in the collection of Mrs Strickland at Cokethorpe Park, Oxfordshire and thence to Mr Clement Cottrell Dormer; acquired at his sale at Knight, Frank and Rutley’s 12 November 1908, lot. 158, by Lord St Oswald; purchased by National Trust by private treaty with the aid of a grant from the Heritage Lottery Fund, 2002.

Nostell Priory, The St Oswald Collection (National Trust), purchased by private treaty with the aid of a grant from the Heritage Lottery Fund.