possibly Thomas Chippendale (fl. 1766 - 1771 when operating without a business partner) 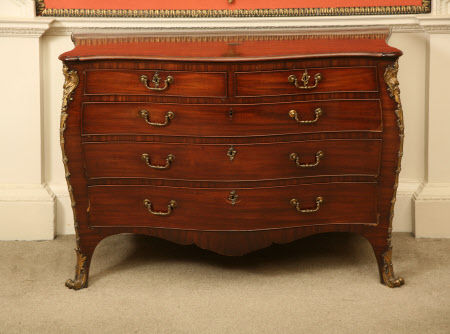 A mahogany and gilt metal-mounted serpentine commode, English, possibly supplied by Thomas Chippendale (fl. 1766 - 1771 when operating without a business partner) or Chippendale, Haig & Co. (fl. 1771 - 1779) to Nostell Priory, circa 1770. Of two short and three graduated long drawers, all cockbeaded. The crossbanded top with moulded edge. The angles mounted with plaques cast with tendril-wrapped reeds and acanthus terminating in scroll-cast feet. The back paneled. ---

This fine quality commode is only 'possibly' by Thomas Chippendale because it cannot be positively identified in surviving accounts. It could be the commode invoiced on 23rd April 1770 as 'a very large mahogany Commode' which cost £7, 17s, 6d. It may also be the commode which Rowland Winn called 'Lady Winn's Commode' in a letter to Thomas Chippendale dated 4th October 1770, and which was having to be returned because it was 'too large for the place tho' you measur'd it.' See also the other commodes at Nostell Priory, NT 959741 and NT 959737. Another commode which appears in the correspondence between Rowland Winn and Chippendale - a 'Compass front Commode' which cost £7, 7s, 0d - might also be one and the same as this commode. It has been pointed out that this commode's handles (which are the original) are identical to others on pieces which are documented as being by Chippendale. (Entry adapted by Megan Wheeler, February 2018)

Possibly purchased by Sir Rowland Winn, 5th Baronet and thence by descent until accepted by HM Treasury in lieu of death duties on the estate of Rowland Winn, 4th Baron Oswald (1916 - 1984), in 1986.