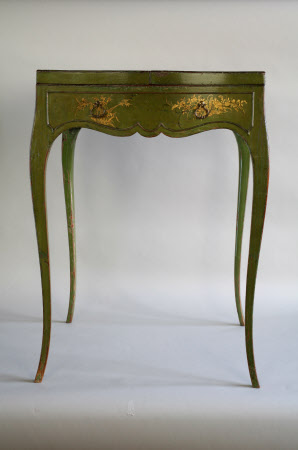 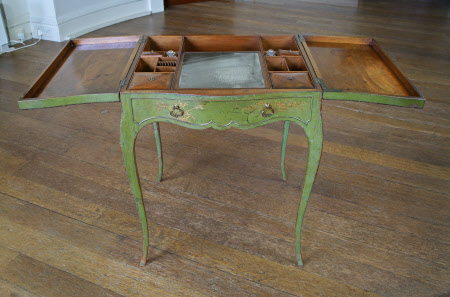 A green-japanned dressing table or dressing stand, English, 1771, made by either Thomas Chippendale (fl. 1766 - 1771) or Chippendale, Haig & Co. (fl. 1771 - 1779) for Sir Rowland WInn, 5th Baronet (1739 - 1785), to stand in the Middle Window of the Alcove Bedchamber (now the State Dressing Room). Part of a set of green japanned furniture made for the best bedchamber and dressing room at Nostell Priory. Of serpentine form, japanned all over in green and gilt with Chinoiserie motifs and scenes. The front frieze with applied beading to simulate a drawer, and two brass handles. The top formed of two hinged parts, the underside of each part sunken, and enclosing a fitted interior all lined in mahogany. Centred by a sliding glass on an easel or strut support surrounded by compartments, some with slightly square-domed mahogany lids with brass handles. The lids with small wedges to the corner joints. Also with removable divisions forming racks, and with two stoppered glass bottles. On elegant cabriole legs.

This elegant dressing table or stand is not paralleled elsewhere, although it is related to the dressing table made for Garrick, now at Anglesey Abbey [NT 514482]. The japanned suite by Chippendale at Harewood House does not include a dressing table of this form. It is beautifully proportioned, its lines delicate and its decoration exuberant and 'glamorous' (Gilbert, p. 171). It was originally intended for use in a bedchamber. Elements of its fitted interior closely resemble those to the Gentleman's Dressing Table supplied in 1769 [NT 959762.10] and are of the best quality. Each of the square-domed lids to the interior compartments, for example, has a wedge driven into corner joints to counteract the expansion and contraction of timber. Originally noted in an undated list of circa 1770 as 'a dressing table with a foulding [sic] tops Japan'd green & Gold, to Stand in the Middle window'. A letter of Thomas Chippendale to Rowland Winn on 17th April 1771 notes 'On Monday last we sent (to the George and white Heart in Aldersgate street) the following Goods Viz 8 Green & Gold arm Chairs, A Jappan'd Cloths press, a ditto dressing Table...all well pack'd'. Listed in the Accounts on the 8th April 1771, 'To a very neat Japan Dressing Table £7 - 7s - 0d'. It is noted in a list headed 'Sir Rowland Winn', written in April - May 1771, as sent. (Entry adapted by Megan Wheeler, February 2018)