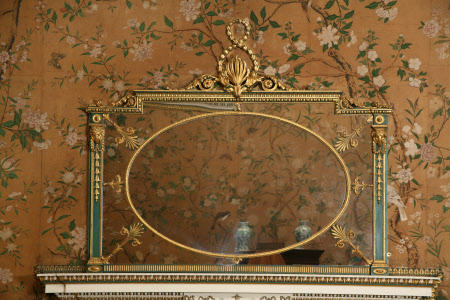 A painted and giltwood chimney glass, supplied by either Thomas Chippendale (fl. 1766 - 1771) or Chippendale, Haig & Co. (fl. 1771 - 1779) to Nostell Priory in the early summer of 1771. The frame an flat-arched rectangle, but centred by an oval mirror plate within borders divided by fillets carved as anthemion. The mirrors toprail carved with egg and dart, and topped by an elaborate giltwood cresting of anthemion between foliated scrolls and beneath an entwined garland of husks; the pilastered uprights each topped by a ram's head issuing a garland of husks, above a plinth carved with a floral patera; the base rail reeded.

Mentioned in an unheaded list of what is presumed to be work yet to be completed for the 'small room ajoining' (now a bathroom) the 'Alcove Bedchamber' as 'a Chimney Glass in a Carved Green and Gold frame'. It is again mentioned in a list headed 'Sir Rowland Winn' under a section called 'Goods unfinish'd', probably written in April-May 1771 as 'A Green & Gold Chimney Glass'. When Chippendale invoiced for it on 29th July 1771, it was called 'A large Chymney Glass in A Glass border'd frame neatly Carv'd and finished Green and Gold as the other'. Made to match the glamorous green and gilt japanned bed and dressing room furniture which was installed in the best bedchamber and dressing room, and the small rooms adjoining, in 1771. This mirror has been relocated to what is now the State Dressing Room. (Entry adapted by Megan Wheeler, February 2018)