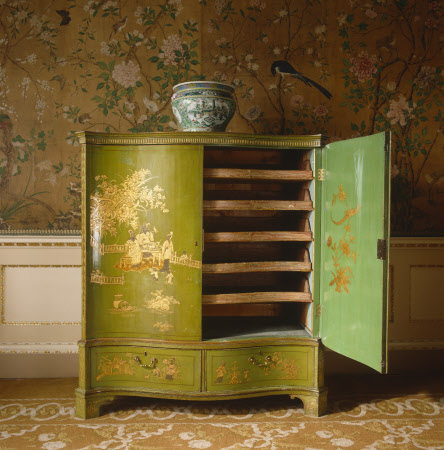 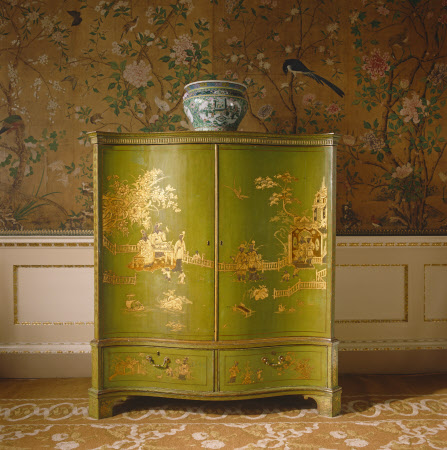 A green japanned serpentine clothes press, English, 1771, made by either Thomas Chippendale (fl. 1777 - 1771) or Chippendale, Haig & Co. (fl. 1771 - 1779) for Sir Rowland Winn, 5th Baronet (1739 - 1785), to stand in the 'small room adjoining' the Alcove Bedchamber, what is now a bathroom off the State Dressing Room. Part of a set of green japanned furniture made for the best bedchamber and dressing room at Nostell Priory. Of serpentine form. The cornice rail fluted and above a pair of doors, japanned on both sides in green with Chinoiserie motifs in gilt and silver, some of the work raised. The sides also decorated. The doors enclosing five deal slides lined with marbled paper, above two decorated short drawers. The angles of the press canted and japanned with pendant husks. The feet shaped brackets. With plain brass thread escutcheons to the keyholes and knopped, scroll and acanthus cast handles to the drawers. The rear paneled. The lower drawers stained red, as are those to a similar press at Harewood House. The handles and paper the same as those to the very fine mahogany clothes press, NT 959763, made in 1766 - 7. Parts of this piece are of walnut. Other pieces in this set use mahogany instead.

The room that this clothes press was designed for was also supplied with amongst other things a chintz window curtain, two japanned chairs and a dressing stool, a chimney glass, and a japanned writing table. Neither the chairs, stool nor the japanned 'Sheffonier' writing table survive. Appears in a list of works to be done at Nostell for the 'Small room ajoining [sic]' and described as 'a low Japan'd Cloaths press with two Short drawers under the doors'. Mentioned in the accounts of 8th April 1771, as 'a Cloaths Press very neatley Japan'd green and Gold with folding doors and drawers under, Sliding Shelves lin'd with marble paper and bays, Aprons, Little Room £24-0-0'. Chippendale wrote to Sir Rowland on 17 April 1771, saying 'On Monday last we sent (to the George and white Heart in Aldersgate street) the followg Goods Vizt 8 Green & Gold arm Chairs, A Jappan'd Cloths press, a ditto dressing Table & a ditto Bason stand. All well pack'd & I hope you will receive them very safe'. Considered to be a fine example of the use of japanning, since later surviving examples, such as that made for Garrick in 1775 (in the Victoria & Albert Museum), has no areas of raised work. The source for these motifs has not been traced. In terms of its shape it is related to a mahogany example, with three drawers in the base [T. Chippendale, Director, First Edition, Plate CIII.] (Entry adapted by Megan Wheeler, March 2018)