The Nostell Priory Saloon Chairs - circa 1778 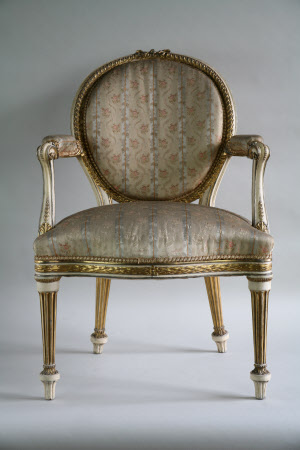 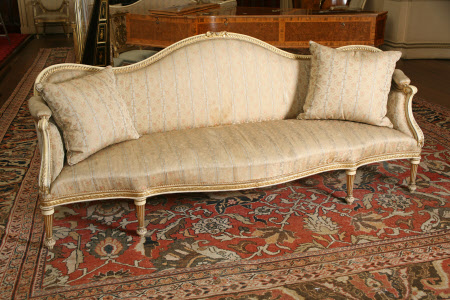 A set of ten pieces of white-painted and parcel-gilt seat furniture, English, probably after a design by Robert Adam (1728 - 1792) and attributed to Chippendale, Haig & Co. (fl. 1771 - 1779) or Haig & Chippendale (fl. 1779 - 1796), probably made for the Saloon at Nostell Priory, circa 1778. Comprising eight open armchairs [NT 959736.1 - 8] and two sofas [NT 959736.9 & 10], all with later upholstery, and all originally all-over gilt. The chairs with oval backs carved with entrelac and topped by a ribbon tie cresting. The open arms padded and on moulded and anthemion-carved arm supports. The upholstered seat in serpentine and beaded husk-carved seat rails, and on four turned and tapering fluted legs.

Attributed to Chippendale's firm on the basis that these chairs 'conform exactly to one of the firm's standard designs', and the discovery of new letters in 1990 which illuminate the 'long drawn-out final phase' of Chippendale's commission at Nostell between 1774 and 1785 (when work was undertaken on the Saloon, Drawing Room and probably the Top Hall) which hitherto had 'only been sketchily documented', and which refers to eight chairs and two matching sofas intended for the Saloon. The newly discovered letters show that Chippendale was at Nostell in 1774 measuring the Drawing Room and the Saloon. In June of that year he wrote to Sir Rowland Winn, 'I have sent...a small case contain'g a section of the Saloon with designs of the furniture which has been settled by Mr Adams and myself & he totally approves everything therein sketched', a passage which reveals Chippendale's and Adam's collaboration. The same letter mentions that, in their opinion 'the Chairs & Sofas should be covered with silk Damask...' Furniture - including '8 Very neat open back Chairs to be Japann'd & Seats covered with Green Taberay...2 Large Sofas to match' - listed in a letter of 30 June 1781 from Chippendale's firm to Winn, was mostly completed by 1778/9, but Sir Rowland either lost interest or found himself unable to pay for items which together (including items for the Drawing Room) cost £570. He was already in debt to Chippendale's firm, and so the furniture remained in London. It was still there when Sir Rowland died in 1785 although, if this is the set of seat furniture alluded to in the firm's correspondence with Sir Rowland's executors, then this, at least, made it to Nostell. (Entry adapted by Megan Wheeler, March 2018)