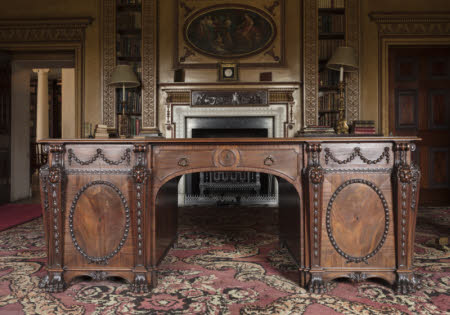 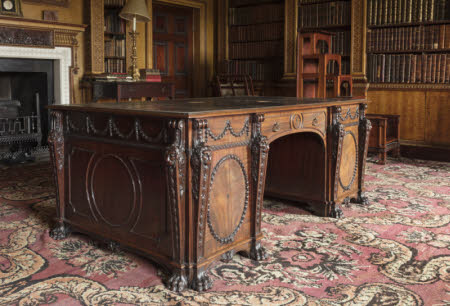 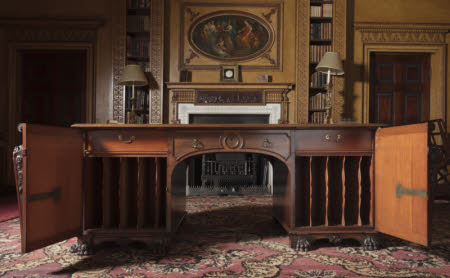 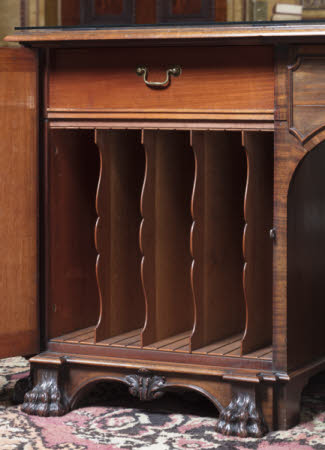 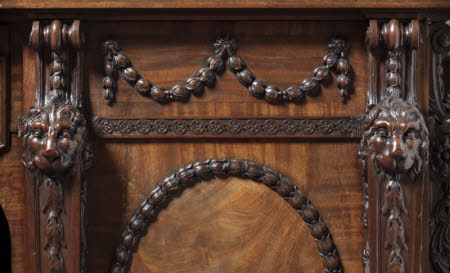 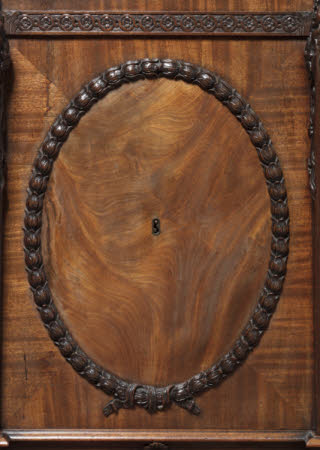 The 18th-century country-house library was a place to read, correspond and study, but it could also make a statement about the owner’s learning and status. When the furniture-maker Thomas Chippendale (1718–79) supplied a ‘large mahogany library table’ to Sir Rowland Winn (1739–85), 5th Baronet, the owner of Nostell in Yorkshire, he stated proudly on the invoice that it was ‘finish’d in the most elegant taste’. The design – a classic and much copied – was the most expensive piece of furniture Chippendale supplied for Nostell. Winn was greatly influenced by his architect Robert Adam (1728–92), whose ordered and elegant designs set the fashion for this period. Winn must have been particularly pleased with this desk, as it features in a double portrait of him and his wife Sabine (1734–98). The desk was made of mahogany, then in high demand for all types of furniture because of its rich colour and ease of handling. However, its popularity led to a system of production that has a darker history, as it was harvested in the Caribbean by enslaved people.

A mahogany library table, by Thomas Chippendale (fl. 1766 - 1771 when working without a business partner). Completed by 27th December 1766 and delivered to Nostell Priory sometime between January 1767 & 30th June 1767, when it appears on a Chippendale invoice. Of double-sided form, of extremely fine timber and with carving of the highest quality, the table's top edge-moulded and covered with the original black leather skiver. Raised on a pair of pedestals flanking a kneehole beneath a drawer at either side with an arched bottom edge. The drawer applied with slender mouldings or beads to form a central circular reserve and two flanking asymetric reserves. The pedestals enclosing cupboards fitted to one side with four oak-lined drawers, and to the other with vertical divisions with ogee-arched front edges, made of both oak and mahogany, for volumes of papers, beneath a drawer. The drawers all fitted with gilt brass bale handles. The doors to the pedestals topped by a frieze with garlands of carved husks above ovals of husks, between flanking upright trusses, each topped by a scroll above a lion mask, pendant chains of husks, and terminating in a lion's paw foot. The sides of these trusses carved with an oval patera and a pendant acanthus leaf. Each door pierced to its centre with an 'S'-shaped keyhole with brass thread escutcheon. The inset 'T'-shaped straps and locks fitted to the inside of the doors of very good quality. The ends of the pedestals with conforming garlands of husks, beaded reserves and flanking trusses. With arched aprons to all sides, each centred by a carved acanthus leaf. Each pedestal fitted to its underside with a large timber block to which attached a single large swivelling castor beneath 'triple-wheel' friction rollers.

This library table is 'generally regarded as the finest piece of mahogany furniture Chippendale ever made' [Macquoid]. It was backward-looking for its time, with lion mask and paw-carved architectural trusses more commonly found on furniture of the Palladian era, and its Neo-classical ornament confined to the restrained paterae and swags of husks but, nonetheless, it was the single most expensive piece of furniture Thomas Chippendale supplied to Nostell, and Sir Rowland Winn, 5th Baronet (1739 - 1785) was justly proud of it. It was installed in the library at Nostell, where it remains to this day, sometime between 27th December 1766, when Chippendale wrote to Sir Rowland saying that it had been finished for some time, and 30th June 1767, when Sir Rowland was invoiced for it by Chippendale's firm. Shortly afterwards, Sir Rowland commissioned a painting of his fine new library: he and his wife, Sabine, stand proudly before this very desk [NT 960061]. Chippendale, too, was justly proud of it and his bill describes it as 'finish'd in the most elegant taste' and 'of very fine wood'. How to deliver it to Nostell without damaging it also occupied his mind, and when he wrote to Sir Rowland to advise that it was finished, he also explained 'your honour thought it was best to send them [it was sent with the fine clothes press (NT 959763)] by water on Account of the expence of land carriage. They are very good things and if the water should hurt them I should be very sorry but they may possibly come safe that way. Sometimes the damp of the ship affects the drawers and locks of good work which is made very close: these are some of the best work than can be done.' Described on the invoice of 30th June 1767 as '...a large mahogany library table of very fine wood with doors on each side of the bottom part and drawers within on one side and partitions on the other, with terms of ditto carv'd and ornamented with Lions' heads and paws with carv'd ovals in the pannels of the doors and the top cover'd with black leather, and the whole completely finish'd in the most elegant taste...£72 0s 0d'. Also mentioned in an unheaded list of 1767 as 'a Large mahogany library table'.

workshop of Thomas Chippendale (fl. 1766 - 1771 when operating without a business partner), cabinet maker