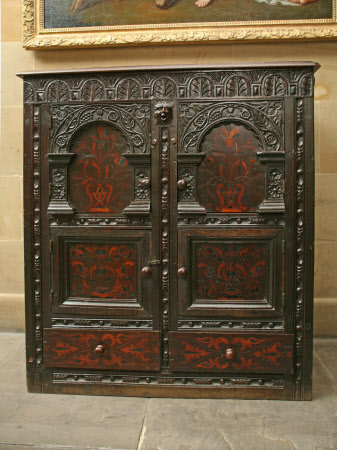 circa 1830 (probably constructed, but with earlier timbers)

A joined oak and inlaid livery cupboard, English, probably constructed in the 19th century from late 16th/17th century components, once thought to have come from a coffer, but more likely to have been salvaged from a tester bed. In its present form, with stiff-leaf carved toprails above a pair of cupboard doors, each formed from a panel inlaid with a vase issuing flowers and with an applied vine-carved arcade with leafy spandrels, a further pair of inlaid panels below. All above a pair of drawers with marquetry fronts. --