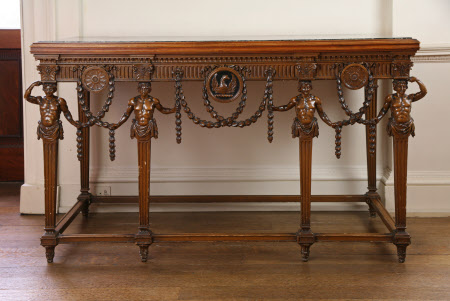 A pair of Neo-Classical scagliola-topped painted wood pier tables, designed by Robert Adam (1728 - 1792) in 1775 for the Top Hall at Nostell Priory, the maker unknown. The present grained finish applied by Thomas Ward in 1821. The top Inset with a green marble and scagliola slab, within a moulded edge. The frieze fluted, centred by a medallion painted with the Winn crest with two flowerhead medallions to either side. The friezes hung with pendant chains with pendant bellflower chains. Raised on four figural front supports; carved as Atlas figures beneath Corinthian capitals and above tapering, fluted shafts. Joined by moulded stretchers, and on tapering feet. ---

These tables read as part of the decorative scheme of the Top Hall's walls, and were designed by Robert Adam. The design, dated 1775, is in the collection of the Sir John Soane's Museum [SM Adam volume 17/28]. By an unknown maker, they were probably originally painted white, and it is unclear whether or not Adam supplied the marble and scagliola to fit their tops. In 1821, Thomas Ward was paid £5, 2s, 0d, for modifications made to '8 carved Hall chairs and 2 rich carved Pier Table Frames painted 4 co: in Oil grained and Varnished with Copal Varnish...'. In addition, a Painter's Day Account records that between 14th March and 19th July 1821, three men worked at '...cleaning the old japan off 8 carved Hall Chairs 2 carved Pier Table Frames...' The eight hall chairs also remain in the Top Hall [NT 959702]. Like the chairs, the friezes to these table bear a medallion painted with the crest of the Winns of Nostell 'on a torse, a demi-eagle displayed ducally gorged ermine'. Their redecoration was part of Charles Winn's modifications to the Top Hall, which was unfinished when he inherited Nostell Priory in 1817. (Megan Wheeler, January 2018)