attributed to Thomas Chippendale (fl. 1766 - 1771 when operating without a business partner) 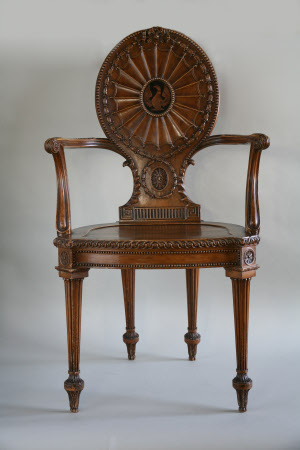 A set of eight beech, lime and inlaid hall armchairs, English, circa 1770 - 1775, attributed to either Thomas Chippendale (fl. 1766 - 1771 operating without a business partner) or Chippendale, Haig & Co. (fl. 1771 - 1779) on the basis of their similarity to a very similar set at Harewood House, another house which was partly furnished by Chippendale's firm, despite the fact that neither set of chairs can be traced in any bill or account for the period. Neo-classical in design, these chairs were originally japanned or painted white to match the scheme of the Top Hall, the room for which they are believed to have been made, but were given a four-coloured grained finish by Thomas Ward in 1821, as part of his work finishing rooms that were still not complete when Charles Winn inherited Nostell Priory in 1817. The pair of pier tables in the same room, which conform to a design of Robert Adam's dated June 1775, were originally also white. With oval backs centred by the inlaid Winn crest, 'on a torse, a demi-eagle displayed ducally gorged ermine', inlaid in oak against a black ground and within a beaded surround. The back carved with a fan within a band of harebells and an outer bead. The back's waist centred by a patera between acanthus and above a fluted shoe. The shaped and dished seat with projecting corners and guilloche-carved edge and beaded 'tablet' friezes. The arms moulded and outswept and on in-curved supports. On turned and tapering fluted supports, each headed by a patera and with a turned collar to the foot.