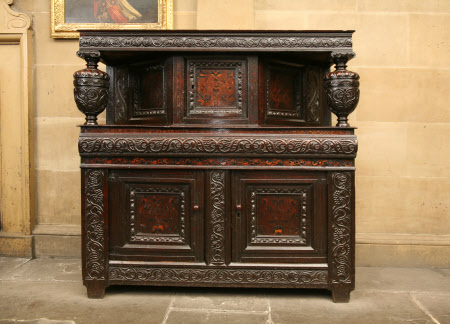 A rare oak and inlaid court cupboard, Leeds and the surrounding area, Yorkshire, mid-17th century. Having a leafy 'S'-scroll carved cushion-moulded frieze, raised on turned bulbous columns topped by Ionic capitals and carved with gadrooning, jeweled strapwork and scrolling foliage. The cupboard of canted form, with a central floral marquetry-inlaid boarded door with applied carved rails, flanked by conforming panels and serpent-carved ends, a leafy 'S'-scroll carved long drawer below, above a pair of conforming marquetry-inlaid panelled doors, the lower muntin rail and stile supports with meandering foliate-carved decoration. This type of cupboard, of very fine quality, is constructed in the Elizabethan-Revival manner; a style popularized in the Leeds area by a large workshop group working around the mid-17th century. It is characterized by the use of inlaid floral panels and/or bands of geometric parquetry inlay, together with the elaborate use of turnings and foliate-inspired carved decoration. This particular cupboard has the distinctive addition of rare carved serpents. Victor Chinnery illustrates two comparable examples which are 'Elizabethan' in character, described by the author as 'an archaic survival of an earlier taste'.