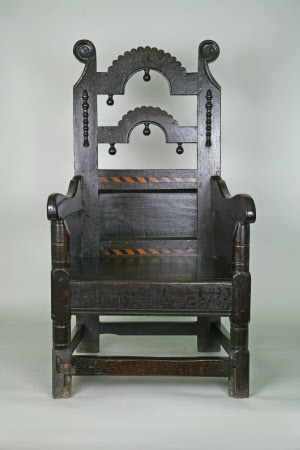 An oak and inlaid armchair, probably Derbyshire/Yorkshire, circa 1685. This chair is extremely unusual, its upper half very like backstools of the period, with two arched and pendant-hung cusped splats between uprights topped by scrolls and applied with split bobbin mouldings, whilst its lower half resembles more nearly enclosed panel-backs of the period. It is possible, therefore, that this chair is a fabrication from a 17th century backstool, but the scale of the back - larger than the average backstool - and the configuration of the back and arms, suggest that it may just be an unusual survival. The panel to the back is between rails inlaid with chequer-inlay typical of Yorkshire chairs. The outward-scrolling large terminals at the top of the rear uprights are unusual. The split bobbin mouldings to the rear uprights, and the pendants to the splats, may well be of fruitwood.