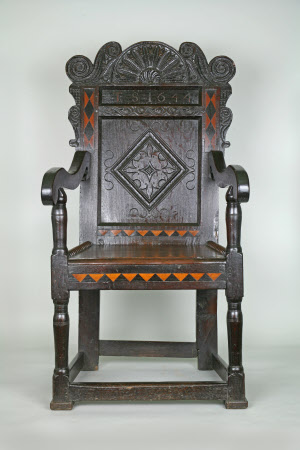 An oak and inlaid panel-back open armchair, South-West Yorkshire, dated 1644. The scroll-ended cresting centred by a foliate lunette, above a back of two panels. The slender upright panel carved with the initials 'TS' and the date '1644' above a scroll-carved rail. The large back panel centred by a foliate 'flying' lozenge, between lozenge-inlaid uprights and scroll-carved ears. The later paneled seat between downswept arms on baluster-turned arms supports. The seat rails dog-tooth inlaid and on conforming block and baluster-turned front legs, with side stretchers. The seat later; the front legs with later blocks beneath.