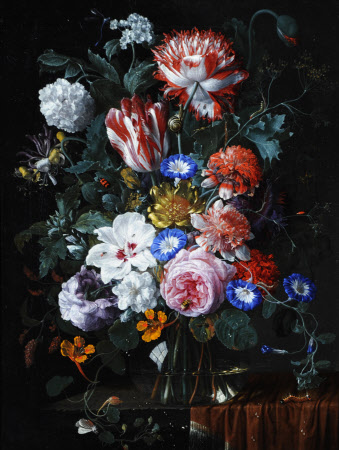 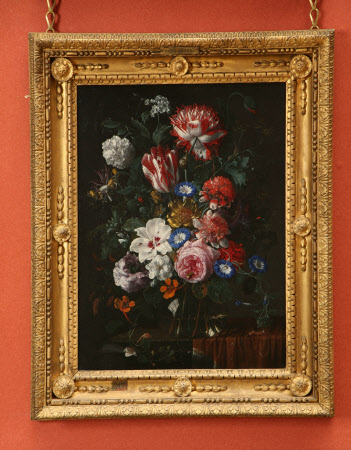 This fantastic floral fantasy was painted by the Flemish artist Nicolas van Veerendael who worked as a specialist flower painter for over 30 years. This painting is typical of his work, a profusion of flowers in full bloom, tumbling out, impossibly top-heavy, from a vase. Veerendael often mixed colours with white, to give the flowers a velvety softness, as seen in this picture. The inclusion of insects, a snail crawling up a stem, a bee loosing itself in the heady petals of a rose and dewdrops on leaves, were placed to remind the viewer of the transitory nature of life. These sumptuous flowers are depicted at their peak, the moment before they will wither and decay. Such symbols, also known as ‘vanitas’, Latin for vanity, were often visible in Dutch still life painting of the period. In the early 17th century, artists from the Low Countries were among the first to produce paintings that exclusively depicted flowers. This was linked to the growing scientific interest in botany and horticulture at the end of the previous century and the Netherlands establishing itself as the European centre for trade in exotic plants. Most famously of all, the 1630s was the period of ‘tulip mania’, when the most coveted bulbs were worth more than a hundred times their weight in gold. Although painted decades later, this painting includes one such desired bloom. The striped petals of the tulip 'Semper Augustus' is placed in the centre of the arrangement. Tulip prices soon crashed but the Dutch remained enchanted by flowers and centuries later Holland is still the leading supplier of flowers and plants not just in Europe but across the world.

Oil painting on canvas, Flowerpiece with Tulips, Roses, Convolvuli and other Flowers by Nicholas van Veerendael (Antwerp 1640 – Antwerp 1691), signed ‘Verendael’ [Brockwell annotated ‘signed: Ni. V. Veerendael 1677’]. Still life by Nicolaes van Verendael of flowers in a glass bowl on a draped ledge, nasturtiums at the base, convolvulus, rose, honeysuckle in centre, Whitsun blossom and tulips above. Born in Antwerp in 1640, Nicholas van Verendael entered the guild at the age of 17 and worked as a specialist flower painter for thirty years. His pictures are built up with numerous glazes, starting with an evenly coloured basic shape and working up to more refined details. He often used colours mixed with white, to give the flowers a velvety softness.

Brockwell 1915 Maurice Walter Brockwell, Catalogue of the Pictures and Other Works of Art in the Collection of Lord St Oswald at Nostell Priory, London 1915, cat. 217