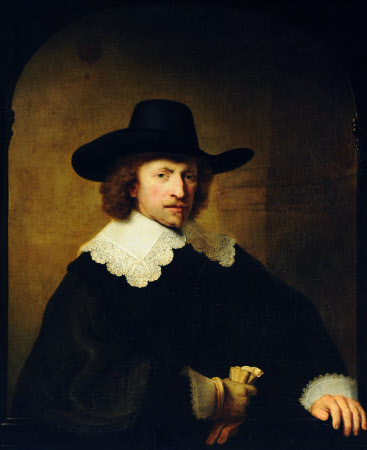 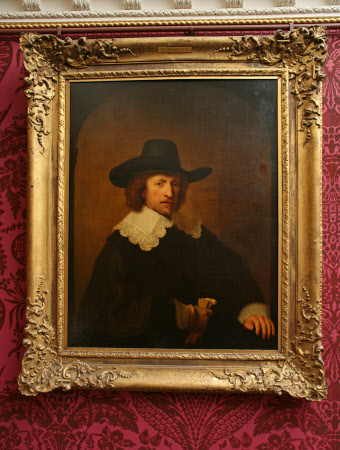 Oil painting on canvas, Nicolaes van Bambeeck (1596 - 1661), aged 44, after Rembrandt van Rijn (Leyden 1606 – Amsterdam 1669), signed and dated ‘Rembrandt f. 1641’. Portrait of a gentleman, half length in black coat lace collar and black hat in an archway. A copy of the original painting, formerly known as a portrait of François Coopal, brother-in-law of Rembrandt, is in the Musée Royaux des Beaux Arts, Brussels and whose pendant of Agatha Bas (1611-1658), whose father was Burgomaster of Amsterdam on several occasions and Bambeeck's wife, is in the Royal Collection. The two portraits were probably separated between 1805 and 1814.

Acquired by Charles Winn from the dealer Elizabeth Sheridan Carey between 1849 and 1854. In 1849, Carey wrote to Charles offering him ‘A chef d'oeuvre' of commanding importance as to size and without question one of the finest specimens that have ever issued from the pen of the master.' Charles agreed to pay the large sum of 350 guineas for the painting, believing it to be a genuine work by the Dutch master, Rembrandt. He paid the money in instalments, but eventually started to doubt its genuineness and whether it was worth the money. In 1853, Carey had to reassure him that ‘My father purchased the Rembrandt from the person who imported it from Holland. My father exhibited it in the United States of America. Mr Seguier to whom I submitted it at the request of the Duke of Wellington declared it to be 'a valuable, a very valuable picture', and declared it to be worth 1200 guineas'. Charles agreed to pay the last instalment of the purchase money in 1854. He must have been very disappointed when the well-known dealer, Samuel Woodburn advised, later that year `…that the Portrait of a Man in a hat with a glove in one of his hands is a good picture by F. Bol, and probably touched upon by Rembrandt'; purchased by the National Trust by private treaty sale from Lord St Oswald in 2010.

On the top of the frame: REMBRANT [sic]

Brockwell 1915 Maurice Walter Brockwell, Catalogue of the Pictures and Other Works of Art in the Collection of Lord St Oswald at Nostell Priory, London 1915, cat. 26, plate XVIII; attributes to Rembrandt, titles portrait ‘Man with a small Moustache’ and locates in the Little Drawing Room.