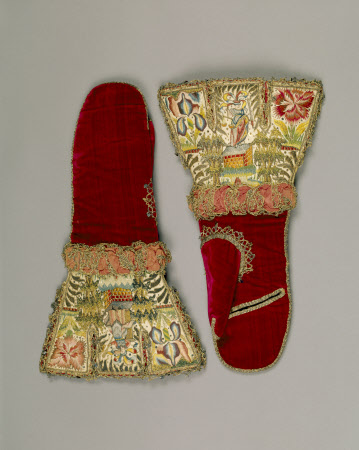 Elaborately embroidered gauntlet mittens like these, popular in the early 17th century, were probably never intended for practical use. They may have been carried in the hand or tucked into one's belt and as such functioned as an ostentatious display of the owner's wealth and status.

Gauntlet mittens with one compartment for the fingers and a separate thumb were worn towards the end of the 16th century and were as elaborately embroidered as the gloves of the period (Cunnington & Cunnington 1970, p.182). Gloves with long square-tabbed gauntlets were popular in the early 17th century, the tabs allowing the gauntlet to pass more easily over the cuffs of long sleeves (Brooke 1992, p. 251). The design of these mittens was probably influenced by this fashion but they were never intended for practical use. Sumptuously embroidered gloves and mittens would have been produced by specialists in professional workshops (Brooke 1992, p. 247) and were a symbol of their owners’ wealth and status. They were usually carried in the hand or tucked into the belt; one may have been occasionally worn, but rarely both (Cunnington & Cunnington 1970 p. 144). Gloves were often given as gifts. In England the exchange of gloves between betrothed couples was common practice and gifts of gloves to wedding guests and officiating clerics were made as tokens of fidelity (Brooke 1992 p. 251). Gloves were also given as gifts to visiting dignitaries and as expressions of loyalty to monarchs and members of the nobility (Brooke 1992 p. 247). The Dunham Massey mittens are decorated with floral motifs and emblems of female figures. The two female figures can be identified by their attributes as two of the four cardinal virtues: the figure of Justice with her sword and scales and the figure of Fortitude (also sometimes known as Courage) standing in front of her column and holding a club (Roberts 2013 p. 912-3). The carnation and the iris are commonly found in Elizabethan and Jacobean embroidery, but within the context of Marian iconography, they have considerable significance. The iris is a symbol of the Virgin Mary’s suffering and Mary, as Mater Dolorosa, is sometimes depicted with an iris piercing her heart (Hall 1985). Indeed, the common name of the iris is the sword lily. The pink carnation is also symbolic of Mary's sorrow at Christ’s crucifixion, as the flower is said to have first bloomed at the site where the Virgin shed tears on seeing her son carrying the cross. This reading of the carnation and the iris as religious symbols is strengthened by the presence of what appear to be bushels of wheat flanking the platforms upon which the personifications of Justice and Fortitude stand. A bundle of wheat is of Eucharistic significance, symbolising the body of Christ and the bread taken during the service of Holy Communion (McNamee 1972, p. 263). Taken together, then, the iconography of the embroidery can be read as a message to the recipient that they are regarded as one who possesses the moral characteristics of Justice and Fortitude but that their actions are tempered by an ability to bestow spiritual nourishment and love. A similar pair of mittens, in the V&A (1507&A-1882), c. 1600, are said to have been a gift from Elizabeth I to her maid of honour, Margaret Edgcumbe, wife of Sir Edward Denny. References S. William Beck (1883) Gloves, Their Annals and Associations: a chapter of trade and social history. London: Hamilton, Adams & Co. Brooke, X (1992) The Lady Lever Art Gallery: Catalogue of Embroideries. Bath: Alan Sutton Publishing Ltd. Cunnington, C.W. & Cunnington, P. (1970) Handbook of English Costume in the 16th Century, London: Faber & Faber. Campbell, G (ed.).(2006) The Grove Encyclopaedia of Decorative Arts, Volume 1, Oxford: Oxford University Press. De Denne, L. (1979) Creative Needlecraft, London: Sundial Books Ltd. Hall, J. (1985) Hall’s Dictionary of Subjects and Symbols in Art, London: John Murray. McNamee, M.B. (1972) ‘The Origin of the Vested Angel as Eucharistic Symbol in Flemish Painting’, Art Bulletin, 54, pp 263-78. Roberts H.E.(ed.). (2013) Encyclopaedia of Comparative Iconography: Themes Depicted in Works of Art Volume 2 London: Routledge.