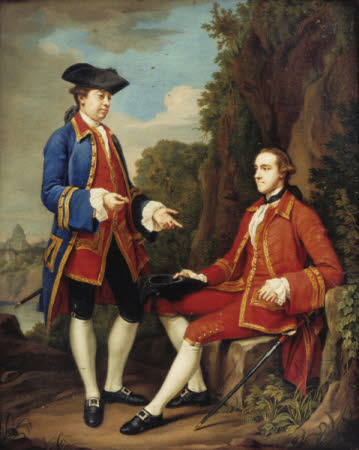 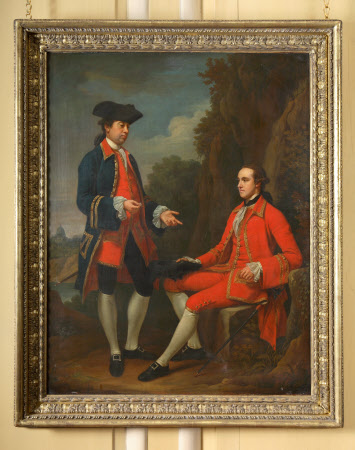 This elegant conversation piece was painted by Dance in Rome in 1760. It shows the twenty-three year-old George Grey, later Earl of Stamford, with his travelling companion, Sir Henry Mainwaring, who is showing him a cameo ring. Dance was one of the first British artists to paint conversation pieces in Rome. This is a fine example of his mature mastery of the art of depicting the British visitor on his Grand Tour. Both Grey and his companion also commissioned Dance to paint a subject from Virgil. For Mainwaring he painted ‘Aeneas and Venus’ (Private Collection), and for Grey he painted ‘Dido and Aeneas’ (Tate Gallery).

Oil painting on canvas, George Harry Grey, Lord Grey of Groby, later 5th Earl of Stamford (1737-1819) and his Travelling Companion, Sir Henry Mainwaring, 4th Bt (1726-1797) by Sir Nathaniel Dance-Holland RA (London 1735 – Winchester 1811), 1760. Two full-length portraits, Mainwaring on the left, standing, turned to the right, speaking to his companion, wearing a blue coat with gold braiding, a scarlet waistcoat also with gold braiding, wearing a tricorn hat, Lord grey ssitting on a stone seat on the right, turned to the left, wearing a scarlet coat with gold braiding with his tricorn hat held on his right knee. Rocks and vegetation behind him, distant view of a city on the left which is dominated by a domed building, cloudy sky. Mainwaring lived at Peckover Hall, Cheshire.

Sold Sotheby's 30 June 2005, lot 69; purchased from Richard Green Ltd for Dunham Massey in 2005 with the help of the Victoria and Albert Museum Purchase Grant, the Art Fund and the Whiteley family trust