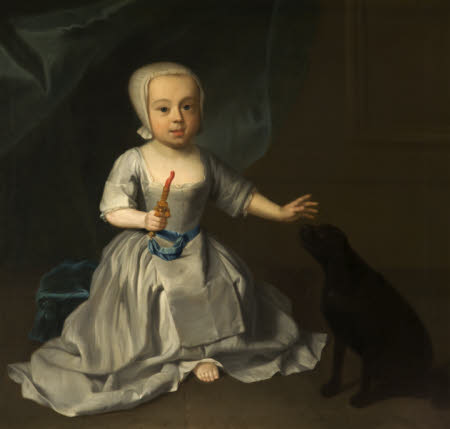 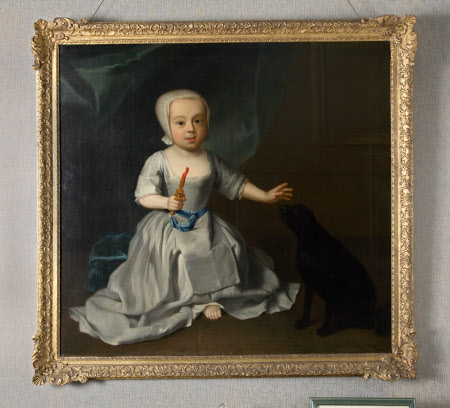 William Booth, who died in infancy, was the elder brother of Henry Booth, 1st Earl of Warrington (1651-1694). A typed note on the back of the picture identifies the child as William, and indeed, a portrait, so identified, can be traced back to an inventory of 1769. However, though the present picture is clearly an 18th-century, not a 17th-century, painting, its true identity might well have been lost after the death of the second and last Earl of Warrington in 1758. It has been proposed that this is instead a portrait of a child of the Grey family, namely George, Lord Grey of Groby, later the 5th Earl, painted for Enville Hall. The fact that this child was thought worth having its portrait painted on its own, whilst still teething and in petticoats, suggests that the child was heir to the title.

Oil painting on canvas, An Unknown Child with a Puppy, possibly George Harry Grey, Lord Grey of Groby, later 5th Earl of Stamford (1737-1819), British (English) School, circa 1740. Full-length portrait of a child, seated, on a blue silk cushion, turned slightly to the right, gazing at the spectator, wearing a grey frock with a grey apron, a blue satin sash, and a small white bonnet, a coral teething/rattle is held in his right hand, his left hand is held out to stroke a small black dog on the right. Glimpse of foliage to the top left.

Verso: A typed note stuck on the back of the picture is inscribed: WILLIAM, elder brother of the first Earl of Warrington, when a child by J.Richardson.