Apollo in his Chariot preceded by Aurora 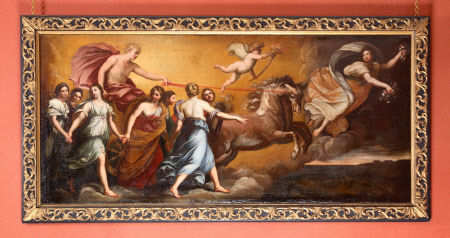 This picture is a copy after Reni’s fresco in the Casino dell’Aurora, in the Palazzo Pallavicini, in Rome. It was painted for Cardinal Scipione Borghese in 1614. It shows the passage of Apollo, the Sun God’s chariot, which is preceded by Aurora (Dawn), who casts roses onto earth below. She is accompanied by an ‘amoretto’ bearing a lighted torch, who has been identified as Phosphorus, the morning star. The fresco was much-copied – from reduced copies in oil, or engravings.

Oil painting on canvas, Apollo in his Chariot preceded by Aurora, after Guido Reni (Bologna 1575 – Bologna 1642), 17th century. After an original fresco by Guido Reni, 1613/14, in the Casino dell'Aurora, Palazzo Pallavicini-Rospigliosi, Rome. Aurora, accompained by a cherub-like Phosphorus, the morning star, and the sun chariot driven by Apollo with the Hours.