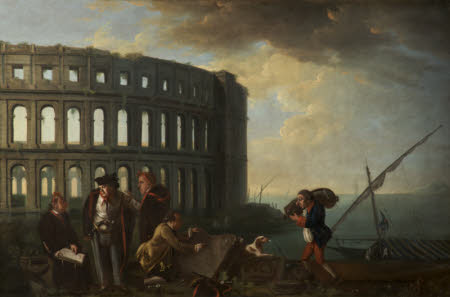 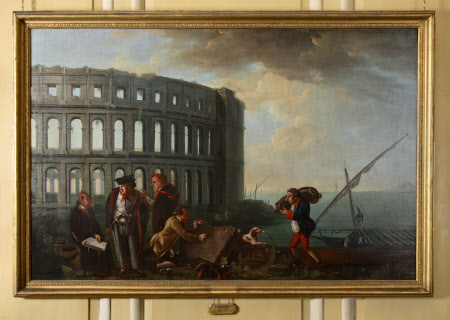 Lord Grey (of Dunham Massey) made his Grand Tour of Italy in the company of Sir Henry Mainwaring. The two men arrived in Rome from Naples on 9 February 1760, but when or by what route they had come to Italy is not recorded. Whilst in Florence Patch introduced them into his large caricature group, ‘The Punch Party’ (also at Dunham Massey). This group is an entertaining record of an unusual excursion undertaken with Jacob Houblon and his tutor. The artist had arrived in Florence after an enforced departure from Rome in 1755. Here he painted views of the city, and found his chief market in the type of caricature group seen here.

Oil painting on canvas, Antiquaries at Pola: Sir Henry Mainwaring Bt (1726-1797), Jacob Houblon (b.1736), George Harry Grey, 5th Earl of Stamford (1737-1819) and the Reverend Jonan Lipyeatt by Thomas Patch (Exeter 1725 - Florence 1782), signed and dated, 1760. Inscribed: VOYAGE FROM VENICE TO POLA IN ISTRIA 1760 and with the name of the four tourists. Mainwaring is seated on a Roman altar at the left; beside him Houblon stands, extravagantly dressed in check trousers and red-lined hooded black cloak, a pistol in his belt; and next to him Lord Stamford in a similar cloak; Lipyeatt in the foreground is bending over a marble fragment which he is deciphering. A fragmentary marble head caricatures the features of Patch and his spaniel, with water gushing from his mouth, appears to represent a life-like fountain; a lateen-rigged boat at the right, a servant carrying baggage and in the background the amphitheatre at Pola. Pola or Pula, is opposite Venice on the coast of Istria (now in Croatia).

Presumabaly acquired in Florence in 1760; bequeathed to the National Trust with the house, estate and all the contents of Dunham Massey by Roger Grey, 10th Earl of Stamford (1896 - 1976)