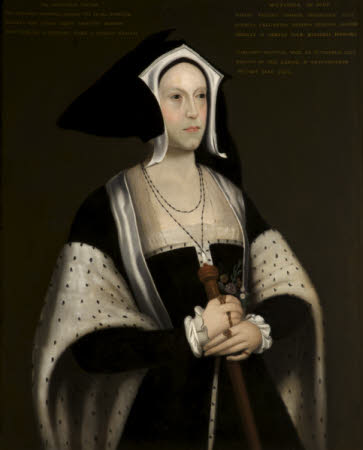 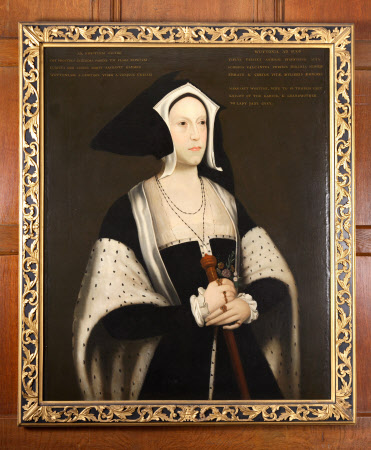 The sitter was the daughter of Sir Robert Wootton of Boughton Malherbe. She married William Medley as her first husband, and Thomas Grey, 2nd Marquis of Dorset (1477-1530), as her second (she was also his second wife). She bore him four sons and four daughters. Three of these sons were beheaded, including the eldest, Henry, father of the unfortunate Lady Jane Grey (No.12). The youngest, John, was the father of the 1st Lord Grey of Groby and ancestor of the Earls of Stamford. This is an imaginary portrait.

Oil painting on panel, Margaret Wootton, Marchioness of Dorset (1517-1535), and is based upon a Holbein drawing which was taken from life, and which is part of a famous collection of engravings by Bartolozzi. Dunham Massey has a copy of the Margaret Wooton engraving – NT930131. The entry for this engraving makes it clear that the image is “after Holbein” Three-quarter length portrait of a woman, turned slightly to the right, gazing to the right, holding a long cane and a small sprig of flowers in both her hands which she holds at her waist, wearing a black dress edged with ermine at the neckline and a black ermine-lined coat, revealing large expanse of ermine in her turned-back sleeves. She also wears a black gable hood with white reveals. Wife of Sir Thomas Grey Marquess of Dorset. Lengthy inscriptions.