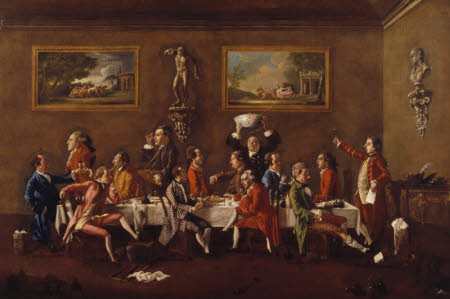 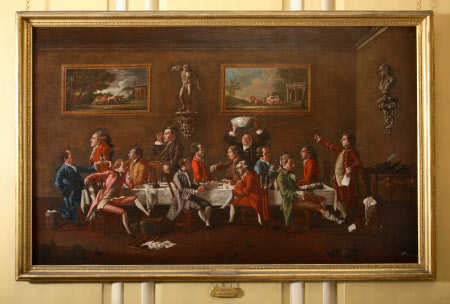 Fourteen figures, identifiable by numbers inscribed above their heads, are engaged in various activities around a table. On the wall at the right the artist has introduced a caricature bust of himself with the ears of a faun. That the inscribed names were added later for Lord Stamford is evident from the fact that at the time the group was assembled neither he (then Lord Grey), Moray, nor Grantham had succeeded to their titles. Thirteen of the men are clearly men of fashion. One of them, Lord Grantham, is carrying a peddler's tray filled with cameos from which Lord Grey has evidently acquired the example he wears on his finger. But their principal concern is with drinking the punch provided by the innkeeper, Charles Hadfield. The spirit of the party is echoed by the furnishing of the room: on the wall hang paintings of Bacchus and Silenus and between them is a replica of the Dancing Faun in the Uffizi, standing, as does the bust of Patch on a socle decorated with the Medici arms. Hadfield's inn was known as Carlo's and was near Santo Spirito on the left bank of the Arno. It flourished as a fashionable meeting place for the English visitor in Florence until Hadfield's death in 1776, after which it was carried on by his widow. Lord Grey made his tour of Italy, in company with his friend and country neighbour Sir Henry Mainwaring, in 1760. Before arriving in Florence they were painted together in Rome by Nathaniel Dance. (A miniature copy of 1760 by Theresia Concordia Mengs, NT 932363, but not the original, is at Dunham Massey today.) Their appearance in the present work suggests that they shared a certain degree of artistic enterprise, for this is the earliest known of Patch's caricature group of Anglo-Florentine society, 'of his sociological, thought not very high artistic, interest' (Ellis Waterhouse, The Dictionary of British 18th century painters in oils and crayons, 1981, p. 269). Patch had arrived in Florence, after an enforced departure from Rome, in 1755. Here he painted views of the city, formed an appreciation of early Italian painting (selecting examples to engrave), and found his chief market in the type of caricature for which Reynolds had set a precedent. Thereafter he was to fulfill a consistent demand, catering in a coarse style and in his own particular vein of ribald humour and fancifulness to this aspect of 18th-century taste - which since the Dunham Massey picture is merely referred to as a 'caricature' in a 19th-century inventory, may have met with disdain of a later generation. Adapted from St John Gore's catalogue entry for Gervase Jackson-Stops [ed.], exh. cat., Treasure Houses of Britain: Five Hundred Years of Private Patronage and Art Collecting, New Haven and London, 1985.

Presumably commissioned or acquired by Lord Grey (who succeeded as 5th Earl of Stamford in 1768) in Florence in 1760; and thence by descent; bequeathed to the National Trust with the house, estate and all the contents of Dunham Massey by Roger Grey, 10th Earl of Stamford (1896 - 1976)