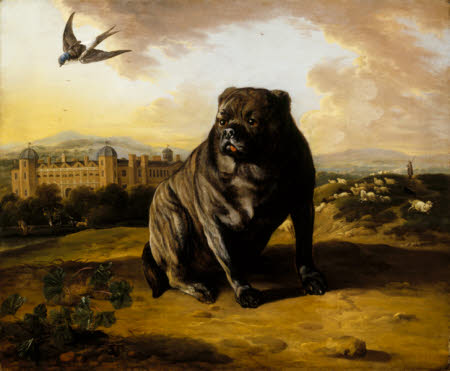 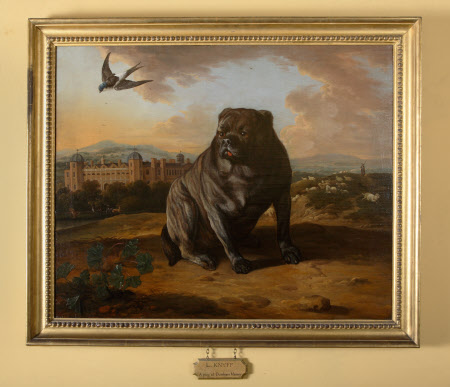 This unusual and dramatic portrait of a favourite faithful dog named Pugg or Old Vertue was painted by the Dutch artist Jan Wyck (c.1645– 1700) and commissioned by a member of the Booth family at Dunham Massey, Cheshire, around 1700. The dog was a type of bulldog or Dutch mastiff, a breed that was cultivated on the estate for several decades. Previous family owners of Dutch mastiffs had described them as ‘Dum, sensible and sincere creatures’, and they were employed as lapdogs and probably also to control vermin and sheep. In this portrait, Pugg’s brindle coat is well lit, and he stands theatrically positioned against the skyline with the house in the distance, looking alertly to the left. He can also be seen in the background, busily chasing sheep in an open landscape. The Booth family clearly cherished their pet dogs, as several other portraits (such as Turpin, a speckled Great Dane) still survive at Dunham Massey. Pugg died in 1702 and has a tombstone in the grounds of the house, beginning a tradition of pet burials that continued into the 19th century.

Oil painting on canvas, A Dutch Mastiff (called 'Old Vertue') with Dunham Massey in the background, by Jan Wyck (Haarlem 1652 – Mortlake 1700), 1700. A painting of a muscular pug with brindle coat, seated on a mound in the immediate foreground, with the south-east side of Dunham Massey Hall in the background at left and the Park in the middle distance. The pug dominates the composition and is turned slightly to proper right. A swallow dives in flight near the pug, at top left. In the middle-distance deer are visible in the parkland at left and at right, a shepherd and his dog herding a flock of sheep.

Pugs, historically called Dutch Mastiffs, were brought from the Chinese imperial court to Europe in the sixteenth century. They were a favourite breed of the House of Orange and gained popularity in England during the coregency of William III and Mary II. The pug shown here is ‘Old Vertue’ and was the beloved pet of George Booth, 2nd Earl of Warrington (1675 – 1758). The son of Henry Booth, who was a supporter of William of Orange, in the 1730s George remodelled Dunham Massey from the seventeenth-century edifice depicted in this picture to the Georgian mansion we see today. In general country gentry and the nobility had their horses painted, but not their dogs. Fond though they might have been of the latter, dogs did not represent the same kind of financial investment as horses, and their bloodlines were not yet so developed. Nor were they the chief occasion for social gatherings such as hunts or races. At Dunham, however, dogs were commemorated not only by a variety of portraits – beginning with this one – but also by tombstones, the earliest surviving of which, dated 1702, is to ‘Pugg, alias Old Vertue’. That such dogs were bred at Dunham is also suggested by the fact that in 1690/1 Katherine Booth (1672-1765) wrote: ‘My cousin Booth [Vere, or his elder brother] yesterday gave me a little Dutch Masty...the prettiest chubbiest face that you ever saw, he is now on my lap’. Jan Wyck was a Dutch painter whose ‘Hunting Pieces’, George Vertue writes, were held in ‘grate Esteem among our Country-Gentry, for whom he often drew Horses & Dogs by the Life’ (Vertue, ii, p. 141). A signed example formerly at Berkhamsted Castle and showing a huntsman with hare and hounds was sold at Sotheby’s in 1986. The present picture has been ascribed to Wyck since it was first recorded in the 1769 ‘Catalogue of Pictures &c at Dunham’ (p. 19, as ‘a Dutch Mastiff...Wyke’).