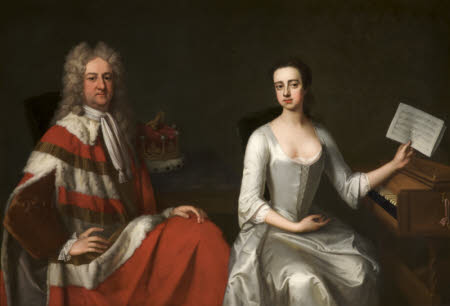 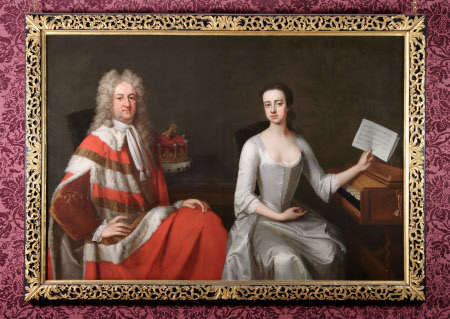 The Earl is here shown with his only daughter Mary, who in 1736 married the 4th Earl of Stamford. Her presence represents her father’s hopes for the future of a house and estate he had spent a lifetime improving, while their archaic, uncomfortable poses illustrate his backward-looking nature, and the obsessive pride in his family and rank that caused one acquaintance to call him ‘the stiffest of all stiff things’. His wife, Mary Oldbury, with whom he had quarrelled early on, led an entirely separate existence at the other end of the house. His daughter holds up a sheet of music which is inscribed ‘Hear ye Gods of Britain....’ The musical score has been identified as the 12th item - a bass aria - from Purcell’s ‘Bonduca or the British Heroine’, written in 1695. Lord Warrington, however, gives no hint that he may burst into song.

Oil painting on canvas, George Booth, 2nd Earl of Warrington (1675-1758) and his Daughter Lady Mary Booth, later Countess of Stamford (1704-1772) by Michael Dahl (Stockholm 1656/9 – London 1743), circa 1720 -30. Two three-quarter-length portraits, the Earl at the left, wearing peer's robes, his daughter at the right beside a spinet, holding up a sheet of music in her left hand on which is inscribed 'Hear ye Gods of Britain....' from Purcell's Boudica or the British Heroine, written in 1695.