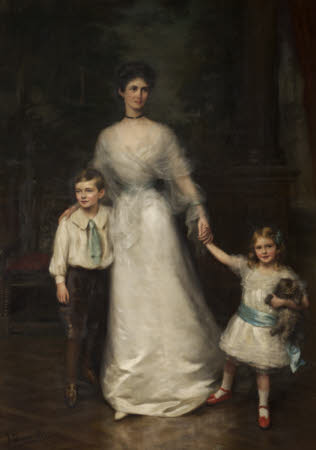 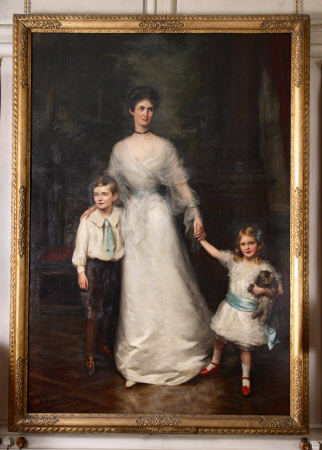 This huge portrait shows the 9th Earl of Stamford's young family. It was painted by John Ernest Bruen in 1904. Penelope, Lady Stamford, is in the centre holding the hands of her two children, Roger, aged 8 and Jane, 5. Jane is pulling away from her mother, clutching a studio cat under her arm whilst Roger stands closely by his mother's side. This spookily reflects their later relationships; Jane married and and moved away in 1927, whilst Roger lived with his mother at Dunham until her death in 1959.

Oil painting on canvas, Elizabeth Louisa Penelope Theobald, Countess of Stamford (d.1959) and her Two Children, Roger Grey, later 10th Earl of Stamford (1896-1976) and Lady Jane Grey, later Lady Turnbull (1899-1991) by John Ernest Breun (London 1862 – London 1921), signed and dated, bottom left: J.Ernest Breun / 1904. Three full-length portraits, the Countess in the centre, facing, but looking to the right, wearing a long white satin dress, her right arm around her son's shoulders, he standing beside her on the left, looking to the left, wearing a white shirt with a pale blue tie, breeches and stockings her daughter, standing on the left holding her left hand wears a white dress and blue sash with a blue bow in her hair. Her daughter holds a cat under her left arm. Vague setting with pillar on the right, and chair on the left and trees and dark sky in the centre background. Penelope, daughter of the Reverend Charles Theobald married the 9th Earl of Stamford in 1895.