The Crucifixion (after Jacopo Tintoretto) 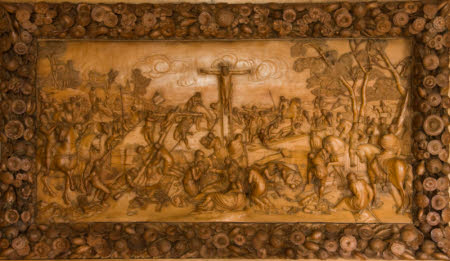 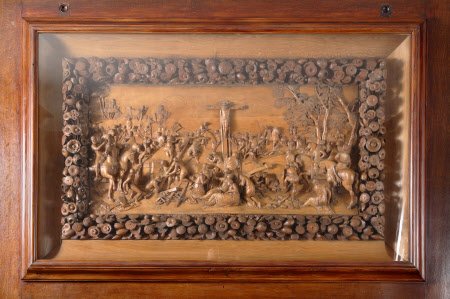 Spectacularly carved from a single piece of limewood, this huge scene is the first authenticated work by the famous woodcarver Grinling Gibbons. It is based on Agostino Carracci's engraving of a painting by Tintoretto in the Scuola di San Rocco in Venice. It was mentioned by John Evelyn in his diaries, when he stumbled across the 19 year old Dutchman carving this piece in his cottage in Deptford. It was in Dunham's library in 1758, where it hangs today, above the fireplace.

Limewood, The Crucifixion (after Jacopo Tintoretto), Grinling Gibbons (Rotterdam 1638 – London 1721). A limewood carving of the Crucifixion with a floral border, fitted behind a glass screen. John Evelyn wrote in his diary, 18 January 1671: "this day first acquainted his Majestie with that incomparable young man, Gibson, whom I had lately met with in an Obscure place, & that by meere accident, as I was walking neere a poore solitary thatched house, in a field in our Parish, neere Says-Court: I found him shut in, but looking into the Window, I perceiv'd him carving that large Cartoone or Crucifix of Tintorets, a Copy of which I had also my selfe brought from Venice, where the original painting remaines: I asked if I might come in, he opned the doore civily to me, & I saw him about such a work, as for the curiosity of handling, drawing and studious exactnesse, I never had before sceene before in all my travells: I asked why he worked in such an obscure & lonesome place; he told me, it was that he might apply himselfe to his profession without interuption; & and wondred not a little how I came to find him out: I asked if he were unwilling to be made knowne to some Greate men; for that I believed it might turne to his profit; he answerd, he was yet but a beginner; but would yet not be sorry to sell off that piece; I asked him the price, he told me 100 pounds. In good earnest the very frame was worth the mony, there being nothing even in nature so tender, & delicate as the flowers & festoones about it, & yet the work was very strong; but in the Piece about 100 figures of men etc: I found he was likewise Musical, & very Civil, sober & discreete in his discourse: There was onley an old Woman in the house; so desiring leave to visite him sometimes, I tooke my leave: Of this Young Artist, together with my manner of finding him out, I acquainted the King, & beged of his Majestie that he would give me leave to bring him & his Worke to White-hall, for that I would adventure my reputation with his Majestie that he had never seene any thing approch it, & that he would be exceedingly pleased, & employ him: The King sayd, he would himselfe go see him: This was the first notice his Majestie ever had of Mr Gibbons.'

Bought by Sir George Viner (1638 - 1673) and after the death of his heirless son, Sir Thomas Viner in 1683 subsequently acquired by Henry Booth,1st Earl of Warrington (1652-1694); first recorded at Dunham Massey in the year of the death of George Booth, 2nd Earl of Warrington (1675-1758); and thence by descent until bequeathed to the National Trust with the house, estate and all the contents of Dunham Massey by Roger Grey, 10th Earl of Stamford (1896 - 1976)