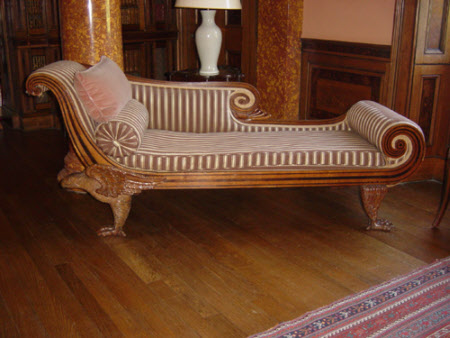 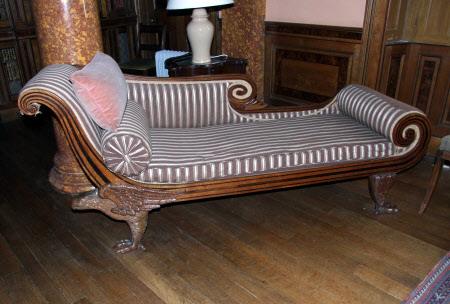 A chaise longue, one of a pair of oak and ebonized walnut chaises longue, or 'Grecian couches', English, circa 1813. Traditionally thought to have been supplied by George Morant (fl. c. 1790 - 1839) of New Bond Street, but now thought more probably to have been supplied by Gillows & Co., of London, for the library at Melford designed by Thomas Hopper (1776 - 1856), completed in 1813. The oak frame inlaid with darker lines and stars of stained walnut. With one high scroll-over end and a half-length back terminating in a scroll carved with gadroons. Raised to the scroll-over end on a pair of supports carved as naturalistic eagles with addorsed wings, the legs at the other end each carved as an eagle's leg and foot. Upholstered in striped cotton fabric with gimp braid.

Part of the furnishings in the Library at Melford Hall, the result of alterations made by Sir William Parker, 7th Baronet (1769 - 1830) when he inherited the house in 1812. The rooms were designed by the architect Thomas Hopper and completed in 1813. Bills for the construction or the furnishing of the room do not survive, but archives at Drummond's Bank, where Sir William kept an account, were discovered by Gervase Jackson-Stops in 1981. The bank's registers record payments for 1812 - 1815 and in 1825, Hopper received £553 14s, Morant & Co. were paid £700 and Gillows £112 17s 6d. The payment to Morant & Co. is thought to have covered the large set of bookcases which line the library proper [NT 926600] and the matching dado, which are of oak, yew-wood and dark-stained walnut. Two reading tables [NT 926535 & NT 926536] with hinged tops, a firescreen [NT 926597], and a library table [NT 926534] form part of the same set, and are also attributed to Morant. In the absence of any other surviving furniture which might have been supplied by Gillows, it is now thought that these couches might account for Sir William's payment to the firm of just over £112. The couches are apparently unique, the eagles symbolizing victory are thought to have been chosen to continue the theme of the room, dictated by its picture hang, with paintings by Romney and Serres. Jackson-Stops noted that the couches are 'obviously based on a conflation of two plates in Sheraton’s Encyclopaedia, published about 1806. Possibly they were designed by Hopper himself, who is known to have influenced the furnishings of other rooms he designed, most notably those at Penrhyn Castle. (Megan Wheeler, 2017)

Date of acquisition not recorded. Part of the Hyde Parker Collection, and by descent to Sir Richard Hyde Parker, 12th Baronet (b. 1937). Melford Hall and part of the collection were Accepted in Lieu and transferred by the Treasury to the National Trust in 1960.