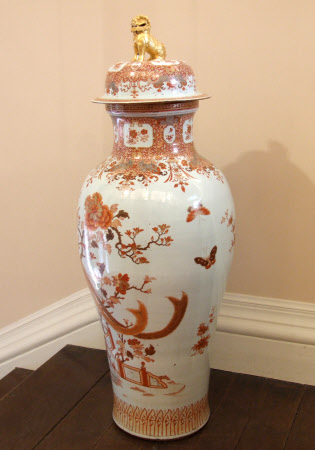 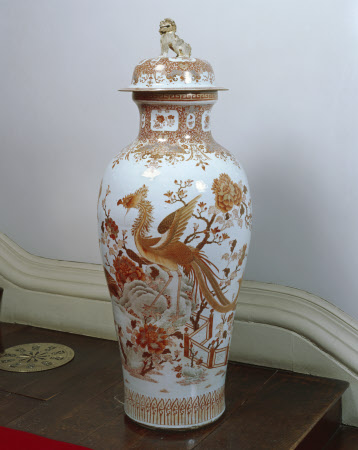 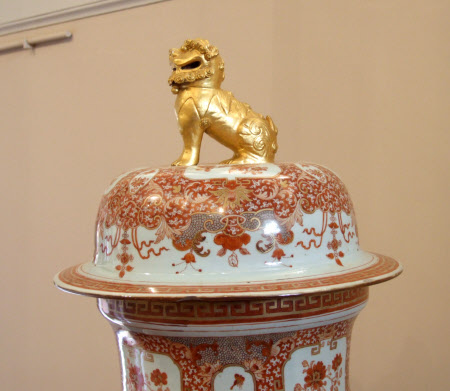 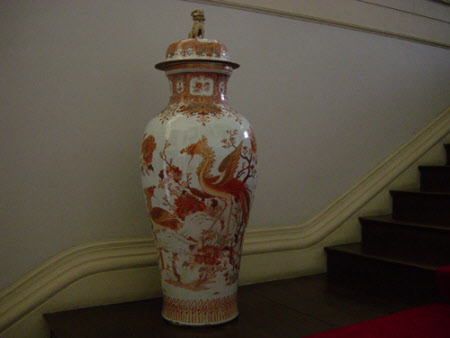 This enormous jar, from the Chinese Qianlong period, mid 17th century, was part of the cargo from the Spanish galleon, Santisima Trinidad, which, laden with presents from the Emperor of Peking to the King of Spain, was captured by Captain Sir Hyde Parker off Manila in 1762. The body of the jar depicts the mythical phoenix, and the cover has a gilded Buddhist dog knob.

Monumental jar with cover, one of a pair, porcelain, of ovoid shape tapering towards the foot, painted in iron-red, sepia and gold, with mythical phoenix (fenghuang) symbols of the Chinese empress, amid tree peony and rockwork, the matching domed cover with a replacement Buddhistic lion dog finial, gilt, Jingdezhen, China, Qianlong period, c.1745. Giltwood base burnt. Provenance: part of the cargo from the Spanish galleon, the Santisima Trinidad, (laden with presents from the Emperor of Peking to the King of Spain) captured by Captain (later Vice-Admiral) Sir Hyde Parker, 5th Baronet (1713-83), off Manila on 31st October 1762. (Information updated by Patricia Ferguson, 2004)